Over the course of Q2, Lane Financial’s synthetic ILS rate-on-line index added an impressive 7% to reach a level last seen more than seven years ago.

Lane Financial’s synthetic rate-on-line index, which is constructed using data from catastrophe bond, insurance-linked security (ILS) and ILW markets, to provide an approximation of premiums being paid (or rate-on-line) for ILS and cat bond transactions, is one of the bellweather benchmarks for the sector. 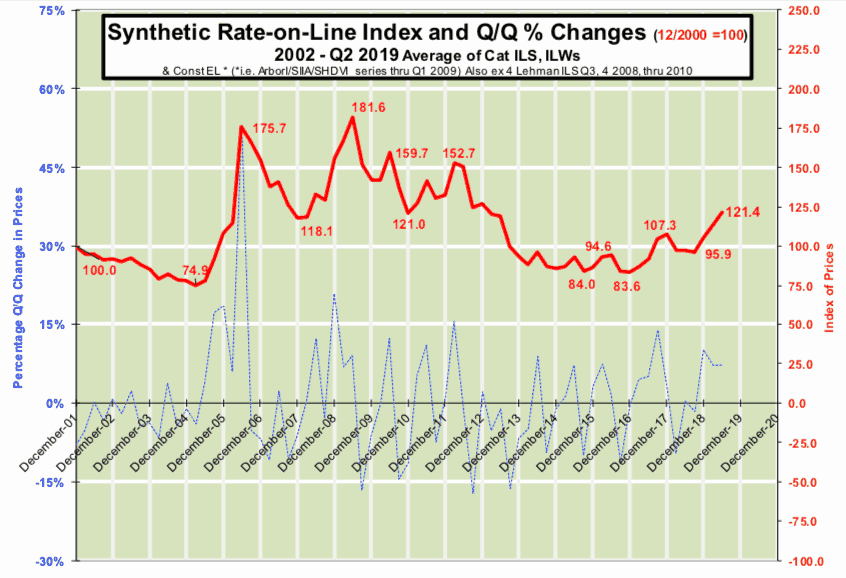 While a 7% increase is impressive, it also seems to reflect a slowdown in rate-on-line appreciation.

The synthetic insurance-linked securities (ILS) rate-on-line index had risen by 15% during the final quarter of 2018, as ILS investors demanded more return from their investments in reinsurance linked instruments following the losses of the last years.

The index then rose by just over 2.5% during Q1 2019, which reflects the fact that this was after the January renewals.

However, the 7% rise in Q2 has manifested in higher rates for ILS issues during the quarter, albeit a sign that the peak may be nearing as the rise was at this slower pace.

The hard market periods that Lane Financial has recorded are better viewed in another of its charts, shown below. 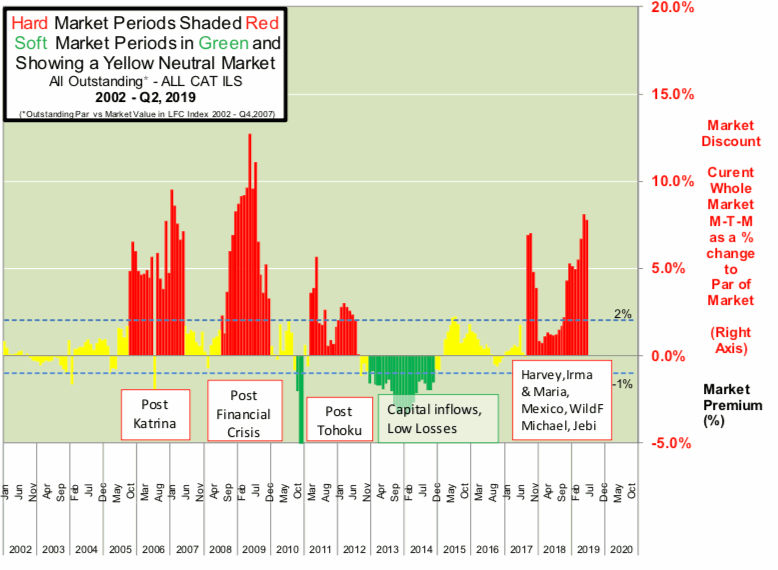 As you can see from the above, the current hard market in catastrophe bonds and other insurance-linked securities (ILS) began right after the major hurricanes of 2017 and has continued since then.

However, the market dipped after the initial impacts of the hurricanes was absorbed, but the hard market came back with a vengeance when the reinsurance and retro market loss creep from hurricanes and typhoon Jebi really kicked in and the added impact from the 2018 California wildfires.

It’s then persisted as ILS markets have dealt with their loss creep over the majority of 2019 so far.

The next quarter may be telling, although data points are typically more scarce as fewer catastrophe bonds tend to come to market during the U.S. hurricane season.

Hence it may be the last quarter of the year that gives us our best glimpse of whether an ILS hard market can persist into the 2020 reinsurance renewal season, or whether an overriding weight of capital may return to pressure the market once again.