Cat bond lites are growing in number and importance

Cat bond lite issuance surpassed $900 million for the third consecutive year in 2019, as a record-breaking 29 transactions came to market, according to the Artemis Deal Directory.

Privately placed catastrophe bond transactions, known as cat bond lites, were first introduced to the market in 2011 and have since grown in both number, with larger deals becoming more frequent, becoming an increasingly important component of annual insurance-linked securities (ILS) activity.

As tracked by the Artemis Deal Directory, in 2019, 29 individual cat bond lite transactions came to market with a combined value of just under $904 million. Artemis’ data shows that in terms of the number of transactions, this is the most ever recorded in a single year, ahead of the 28 issued in 2017 and the 26 deals that featured in 2018.

In fact, the only year that saw the value of cat bond lite deals within a single year surpass both 2019’s total and the $1 billion threshold, was 2017, when 28 privately placed deals brought more than $1.05 billion of new risk capital to market.

Issuance in 2018 declined slightly to approximately $902 million from 26 deals, so only just behind the level seen last year and from three fewer transactions.

The Artemis Deal Directory shows that since the first deal in 2011, all-time cat bond lite issuance, as at the end of December 2019, totalled $4.66 billion from 137 transactions. 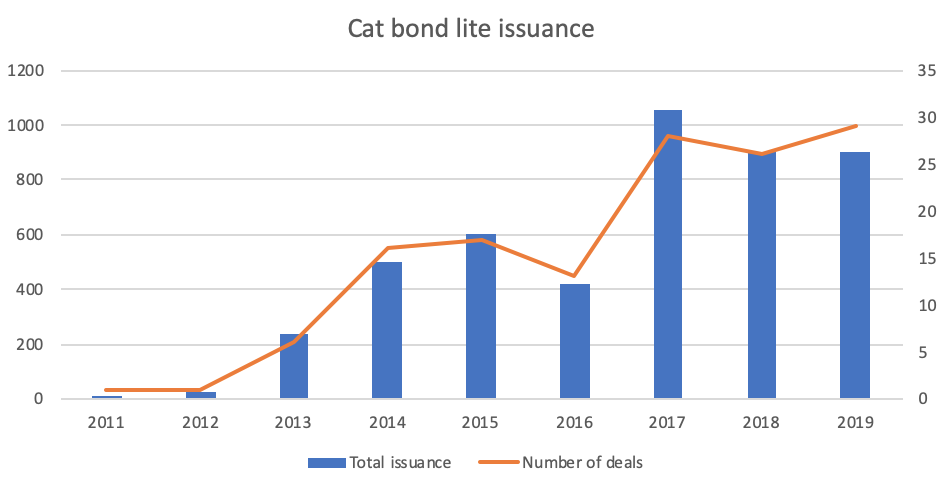 Historically, these types of deals were extremely small in size, but over time, this has changed somewhat and it’s now commonplace to see privately placed cat bonds be larger than $50 million in size, with some even approaching and hitting the $100 million mark.

As more and more private deals completed, the confidence, understanding and trust in a streamlined issuance approach has increased, which in turn has contributed to both the number of deals and the size of these deals increasing.

As shown by data from the Artemis Deal Directory, the contribution of cat bond lite deals to overall, annual catastrophe bond and related ILS issuance has also increased, from just 0.24% in 2011 to 8.2% in 2019, which is only slightly down on the record 8.37% contribution witnessed in 2017, and above the 6.53% seen in 2018.

On average, over the last nine years, annual cat bond lite issuance has totalled $518 million from approximately 15 transactions, while the average annual size of individual deals over this period is around $30 million.

The fact these deals are privately placed means that often, little information is available to us and sometimes we are only able to obtain the name, issuer, and size of the deal. Where possible, Artemis tracks both the trigger structure and peril class of cat bond lite deals, which shows that with these typically smaller deals, investors are treated to trigger, peril and geographical diversification. 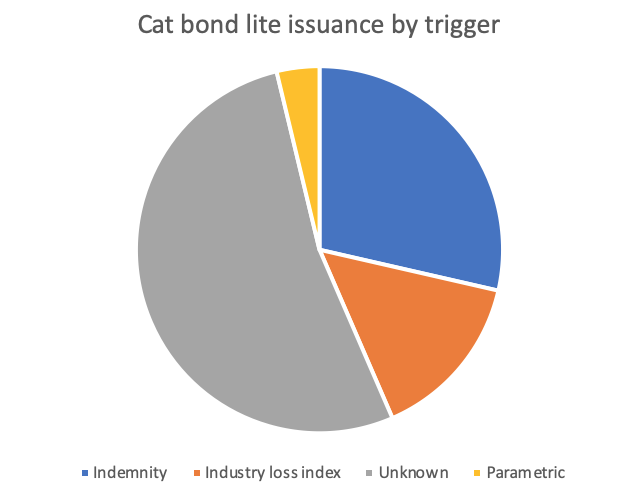 Since 2011, trigger structure information has been unavailable to us for more than 52%, or nearly $2.5 billion of total cat bond lite issuance.

Where we do have trigger information, indemnity structured deals account for 29%, or $1.33 billion of total issuance, industry loss index triggers for 15%, or $694 million, and the remaining $175 million, or 4% of cat bond lite issuance leveraged a parametric trigger.

As is the case with annual, traditional 144A cat bond market issuance, peril diversification is evident in the cat bond lite space. However, since 2011, the largest slice of issuance, at more than $1.7 billion offers protection against unknown property catastrophe risks, which is followed by deals covering U.S. property cat risks, at $808 million, or 17% of total issuance.

So far in 2020, the Artemis Deal Directory shows that nine privately placed catastrophe bond transactions have already come to market, with a combined value of more than $91 million. It will be interesting to see just how active the space is in the months ahead and whether issuance can once again hit the $1 billion mark.