Issuance of new catastrophe bonds and related insurance-linked securities (ILS) has already surpassed $5.1 billion in 2022 and there are already another nearly $2.2 billion in the pipeline that could complete before the middle of the year.

However, despite how buoyant catastrophe bond market activity appears to be, we’re still a long way off the record set in 2017 of $9.55 billion for the half-year, which was almost beaten by half-year 2021’s $9.47 billion.

There’s still plenty of time for some more of the pipeline issuance to upsize though, while we are hearing there are still a few more new catastrophe bonds to be launched.

So, 2022 is on-track for a strong first-half, although perhaps not a record, as cat bonds and the capital markets underscore their importance as a source of reinsurance capital.

A glut of new issue cat bonds have completed in the last few days, including the latest from the most prolific sponsor in the cat bond market USAA, global reinsurance firm TransRe, Florida focused American Integrity Insurance Company, and cat-exposed property specialist Palomar.

Adding these four new issues to our tally takes issuance of property catastrophe bonds, cat bonds covering other lines of business and private cat bonds, to just over $5.1 billion so far in 2022.

Click on the chart image below for an interactive version: 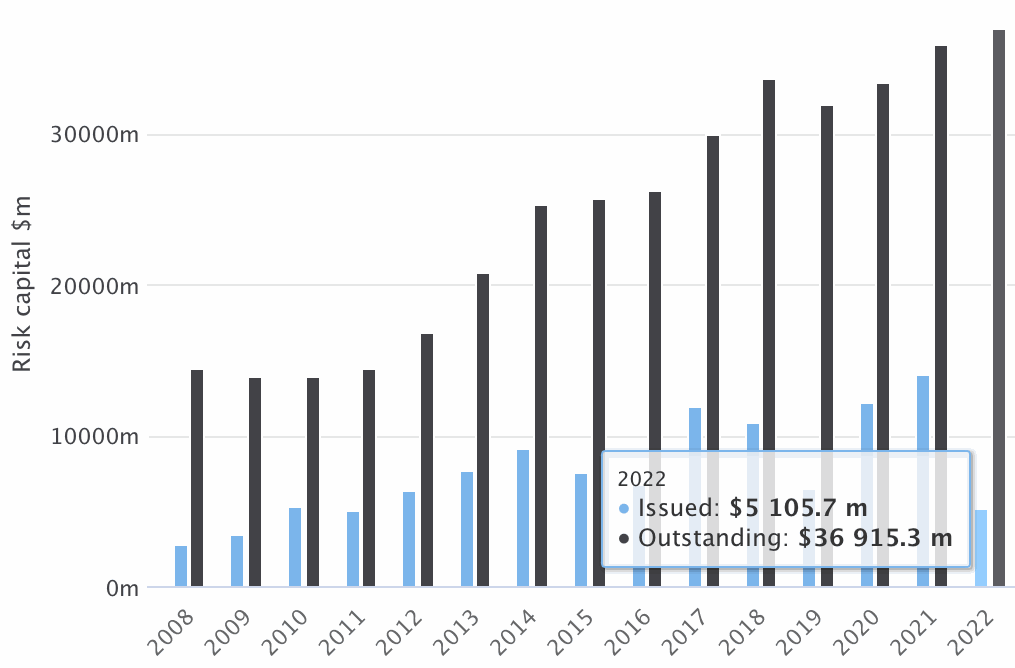 That’s down on the record $37.5 billion we reported at the beginning of April, as maturities have actually outstripped issuance in recent weeks.

When we look at what category or transaction is driving cat bond issuance in 2022, it is clearly the full 144A property catastrophe bonds that are the runaway leader, in dollar-value issued terms.

Property catastrophe bonds issued are at almost $4.4 billion year-to-date in 2022, while private cat bond deals we feature in our Deal Directory are at $390 million and other line of business cat bonds are at $331 million.

In addition, we’ve tracked $756 million of mortgage insurance-linked securities (ILS) as well, for a total of just over $5.86 billion of issuance tracked in the Deal Directory so far in 2022.

Click on the chart image below for an interactive version: 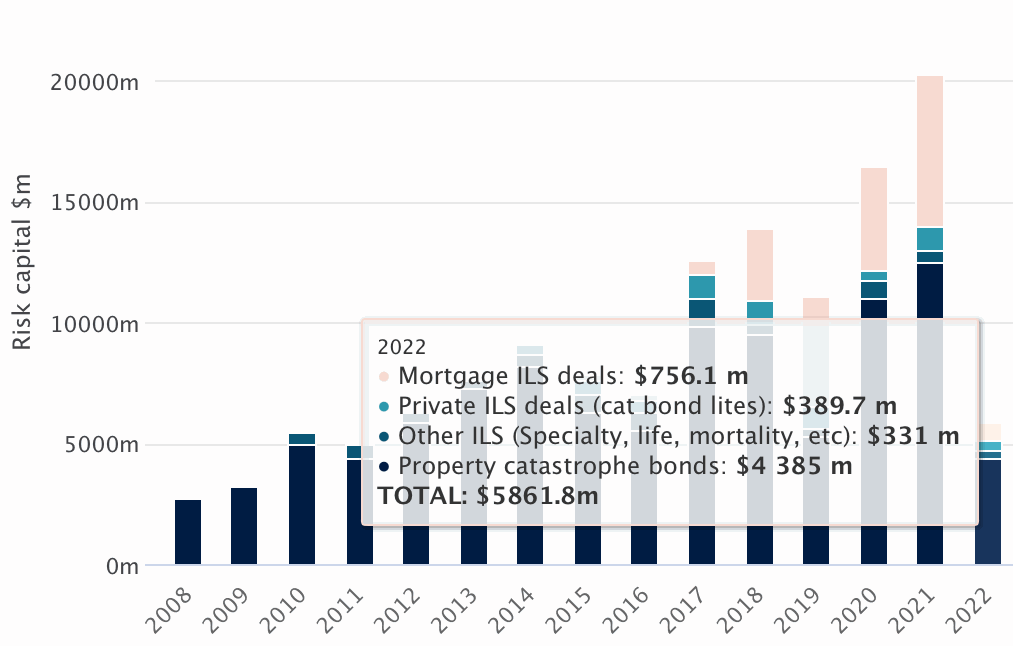 Still listed in our Deal Directory and yet to complete are a targeted 12 cat bond transactions, representing nearly $2.2 billion of new catastrophe bond risk capital as well.

Of these, only a couple of transactions have been priced so far, meaning there is more room for the others to upsize.

It’s not guaranteed that all of these deals will actually make it to market either, given the cat bond market has experienced significant spread widening and investors are being extremely selective about the cat bond deals they support.

One example here might be the UnipolSai Azzurro transaction, that launched to investors in the first-half of April and we understand should have completed in the first week of May, but at this time hasn’t even been priced.

We haven’t heard any news about that transaction since its launch and neither have our sources, suggesting it has either been delayed, is being restructured, or even won’t be issued at all, given hard market pricing conditions and investor appetites at this time.

Right now, it appears the first-half is unlikely to break records, but could represent a very strong start for 2022, and one that could put the market on-track for near record levels of issuance by year-end, given investor appetite for catastrophe bond funds could actually build even more through the second-half of the year, thanks to the higher spreads now available.

All of our catastrophe bond market charts and visualisations are up-to-date, so include this latest quarter of issuance data.