For consecutive years, catastrophe bond issuance in the first-half of 2016 declined when compared to the previous year, with $2.8 billion (this excludes cat bond lite deals, private transactions, and deals focused on business outside of property catastrophe lines) of new issuance January through June, according to a new report from PCS that utilises data from the Artemis Deal Directory.

In PCS’ report ‘Does Size Matter? PCS Q2 2016 Catastrophe Bond Report,’ which analyses catastrophe bond issuance trends in the first-half of 2016, the firm states that despite impressive growth of the sector in recent years it’s really still in its infancy, and has ample opportunity to expand.

PCS notes that repeat sponsors of catastrophe bond transactions were key in the opening months of 2016, with just two of the 14 transactions that came to market coming from first-time sponsors.

“The concentration of old pros demonstrates that the case has clearly been made for including catastrophe bonds in a strategic approach to capital management. But that’s still a far cry from broad adoption, suggesting plenty of room for future growth,” said PCS.

The Artemis Deal Directory shows that reinsurance giant Munich Re, Swiss Re, USAA, among a host of other insurers, reinsurers, and ILS players are dominant forces in the global cat bond market.

The range of sponsors in the sector that return to the space to renew maturing deals, or establish new issuance vehicles in the market, shows how companies have become increasingly understanding and appreciative of the benefits ILS structures can bring to a risk portfolio.

In recent years, notes PCS, issuance in the marketplace has been on a steady rise from both new and old sponsors, but in the first-half of 2016 reinsurance market pressures, sponsors’ cyclical issuance trends and a reduction in cat bond lite transactions contributed to a contraction in H1 issuance, and ultimately the overall size of the market.

According to PCS cat bond lite issuance was down nearly 25% in H1 2016, with no private deals coming to market in the first-quarter. In contrast, the first-half of 2015 saw both growth and innovation in the cat bond lite space, as almost $400 million of issuance, which included Panda Re (the first-ever China focused cat bond), came to market.

And while six cat bond lite transactions brought nearly $300 million of issuance to market in H1 2016, this is half the number of transactions seen in the previous year, although the average size of transactions grew year-on-year to $50 million, says PCS. 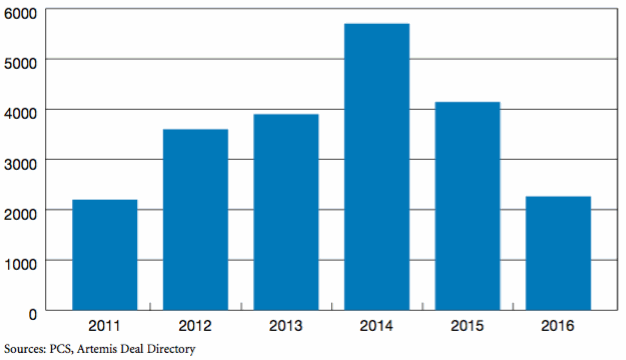 As the above chart shows, issuance in H1 has clearly declined since 2014, but it’s important to note the cyclical nature of issuance. Deals like Everglades Re came to market in 2014, and at $1.5 billion in size and with a maturity date in 2017, it’s to be expected that issuance will dip in the years deals of this volume aren’t up for renewal.

PCS notes that if a deal of this size had come to market in the first-half of 2016, then issuance would have grown year-on-year and not declined, underlining the influence transactions like this can have on the market size.

The competitive reinsurance landscape and recent growth of collateralized reinsurance could also impact growth in the cat bond space, says PCS, but this also shows that cedents “are gaining better access to the tools needed to manage risk and capital more effectively as a result of continued industry innovation.”

Huge reinsurers such as Swiss Re and Munich Re wouldn’t keep returning to the cat bond market year after year if it weren’t an efficient, beneficial part of their risk transfer needs. The market remains awash with capital and investors in the space seem more than willing to soak up whatever issuance comes their way, even at times of reduced returns and broader re/insurance market turmoil, suggesting the sector is ripe for further growth.

The continued growth of cat bond lite issuance, despite moderating somewhat 2016, and growth in corporate sponsors in recent times underlines the ongoing innovation in a sector that is still in its early days, and that has plenty of room to expand and broaden its reach across the risk transfer landscape.