The Carr wildfire in Shasta County California continues to spread, with resulting damage to residential and commercial property now meaning 874 structures have been completely destroyed, with another 175 damaged and more than 5,000 still under threat. 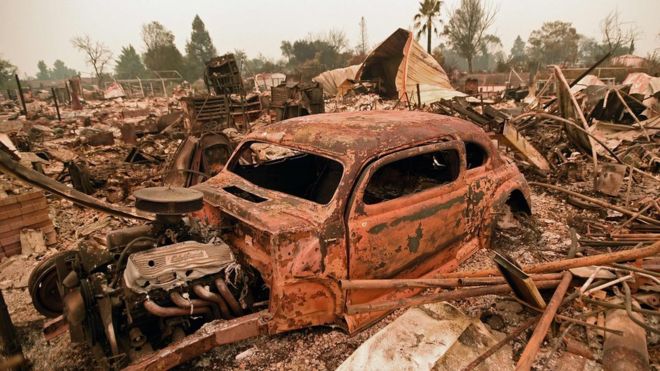 Following a loss-heavy 2017, the insurance, reinsurance and ILS fund sector will be closely watching the developments and in particular the Carr fire which is already considered one of the most destructive wildfires on record.

The Carr wildfire has now spread to 95,368 acres, an area larger than the city of San Francisco with the fire now 17% contained by firefighters.

Thousands are working to bring the Carr fire under greater control and the containment has risen over the weekend, but so too has the spread of the fire and as a result the amount of structures damaged and still under threat.

A number of towns remain near to the Carr wildfire and as a result the local authorities consider 5,012 structures still under threat.

The Carr wildfire was actually caused by the mechanical failure of a vehicle, according to the State authorities.

The California Department of Insurance said that evacuation costs may be covered under insurance policies, explaining that “Thousands of residents forced to evacuate may have homeowner or renter insurance coverage to help with evacuation and relocation costs, even if their homes are not damaged or destroyed, and in many cases no deductible is required.”

“These fires are exacting a devastating monetary and emotional toll on residents across the state and it is imperative that they are aware of every resource available to them to repair and rebuild,” commented Insurance Commissioner Dave Jones. “Insurance coverage is meant to protect consumers from the devastating financial effects of wildfires and other disasters. I encourage evacuees to contact their insurance agent or the Department of Insurance for assistance.”

The Carr fire remains far behind last year’s wildfires in terms of structures destroyed, but at this still early stage of the year it is a warning of the hot and dry conditions in California and the potential for the 2018 wildfire season to be another impactful one for insurance, reinsurance and ILS market interests.

Analysts at KBW said that so far they expect primary insurers to shoulder the bulk of the losses, but should the fire continue to spread or others break out reinsurance contracts will increasingly come into play and aggregate deductibles may begin to get eroded.

Insurers including State Farm, Liberty Mutual, Allstate, Nationwide Mutual, Travelers, Chubb and USAA are all among the most exposed to wildfires and all users of collateralized sources of reinsurance capacity.