A powerful magnitude 7.7 earthquake struck the Caribbean yesterday in the afternoon local time, swaying buildings as far away as Miami, Florida and causing some localised damage to countries including the Cayman Islands, Jamaica and Cuba. 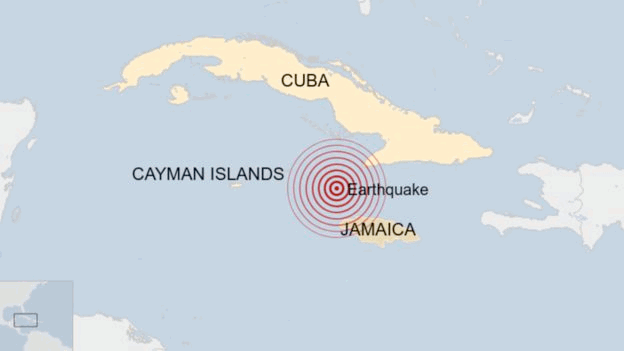 There have been no immediate reports of casualties and damage in the region appears relatively light.

However, the quake could result in an assessment of the parametric catastrophe insurance policies provided by the CCRIF SPC (formerly known as the Caribbean Catastrophe Risk Insurance Facility) and perhaps its reinsurance coverage, as its modelled loss trigger calculation process may be required to run, given the severity of the earthquake event.

A brief tsunami warning alert was issued and local tidal gauges in the Cayman Islands appeared to show a slight rise in sea levels, but the tsunami warning passed without incident.

The earthquake is said to have been the strongest in terms of magnitude to have struck that particular area of the Caribbean since at least 1900.

A strike slip fault is thought to have been the cause of the earthquake, which reduced the risk of tsunami given its sideways motion, rather than vertical.

But this can exacerbate ground motion and in the case of yesterday’s magnitude 7.7 earthquake strong shaking was felt widely across Caribbean islands, while the quake was also felt in Mexico and buildings in Miami swayed and were evacuated.

Social media footage showed damage in the Cayman Islands, where numerous sink holes were seen to have opened up, some damage to sewage infrastructure reported and some cases of property damage.

Jamaica is reported to have suffered little damage aside from some localised impacts.

Footage from Miami, which is over 700km from the epicentre of yesterday’s quake, showed buildings swaying and being evacuated, demonstrating just how strong the ground motion associated with the earthquake was.

The region appears to have been lucky, as far as damage goes. One significant aftershock of magnitude 6.1 struck 57km from the Cayman Islands a few hours after the main quake.

However, even with damage relatively light considering the strength of the earthquake, it’s possible that the CCRIF may need to run its calculation process to define where this event sat against the triggers of islands parametric earthquake insurance policies.

This would be standard practice, as any event can qualify for this assessment even where no damage has been experienced.

The CCRIF is well protected itself by reinsurance from the global markets, so even if yesterday’s quake was to trigger any of the CCRIF parametric policies the facility is extremely well-capitalised and able to pay claims that come due.

The CCRIF has a three-year reinsurance program in place covering all of the perils it provides parametric coverage for. This provides $145 million of reinsurance coverage in three layers above a $25 million retention for the earthquake peril.

Being parametric and based on a modelled loss trigger the fact yesterday’s earthquake was between the Caribbean islands, rather than closer to any of them will likely mean the output of the models would not trouble any individual islands parametric earthquake policy attachment points.

But yesterday’s quake is a reminder of the importance of disaster insurance protection, the benefits of having parametric coverage in place and the important role a risk pooling and policy providing facility such as the CCRIF can play in provision of risk capacity, thanks to its expertise and access to reinsurance markets.

The USGS gave only a 9% chance that economic losses from yesterday’s M7.7 earthquake would surpass $100 million, a 27% chance they would exceed US $10 million.

Events like yesterday’s quake drive home the important role of disaster insurance and parametrics in providing capital that would have been extremely valuable had this earthquake caused more significant damage in the region.

CCRIF earthquake policies are currently in-force for the following countries:

The CCRIF told Artemis, “For this 7.7 earthquake which occurred yesterday (January 28, 2018) NNW of Lucea Jamaica, the CCRIF SPHERA model for earthquakes was automatically run to determine the modelled losses and an event report will be issued soon and disseminated – and put on the CCRIF website.”