The wildfires in southern California continue to spread, with an area the size of New York now burned and over 1,000 structures destroyed in the current outbreak. It’s expected that reinsurance and retrocession will pick up a growing portion of the bill under aggregate covers.

The so-called Thomas wildfire is the largest currently burning in southern California, in Ventura and Santa Barbara counties, but this is not the only fire burning and causing the destruction of homes and businesses in the region at the moment.

The Santa Ana winds continue to blow and with California expected to remain free from rainfall for another few days, further destruction is assured and some fires are threatening larger residential areas, including Santa Barbara itself, a city of close to 100,000 people. 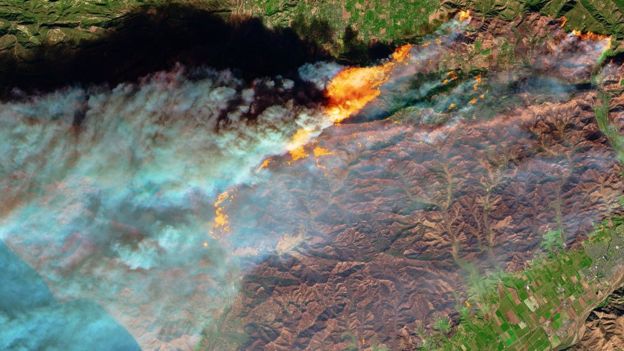 NASA image of wildfires from space via the BBC

The Thomas wildfire has now burned 230,000 acres and destroyed 794 structures, according to the latest data from state fire agencies in California.

Early estimates had suggested that the Thomas fire could have caused an insurance and reinsurance industry loss of as much as $2 billion, but as the wildfire has kept burning and remains so far only 10% contained, it’s now expected that the eventual industry loss from this fire will be significant.

Added to the already assumed to be $10 billion plus toll from October’s wildfires in northern California, the insurance and reinsurance bill for this wildfire season will be the largest on record.

Analysts at Keefe, Bruyette & Woods said that normally these wildfires would largely cause a loss for primary insurers operating in the region, but because of the material catastrophe losses year-to-date an increasing amount of the bill is expected to fall to reinsurance and retrocession providers, especially through aggregate catastrophe covers.

By the beginning of December wildfires had burned more than half a billion acres in California this season, almost 150% above the state’s five-year average.

The still-burning Thomas wildfire is now the 10th most destructive California wildfire on record, based on number of structures burned. With so little of this enormous wildfire contained and the weather remaining hot, dry and windy, it is expected that the numbers of properties lost will increase significantly.

More than 200,000 people have been evacuated from their homes in the face of the wildfires and this will increase the insurance bill, as California Insurance Commissioner Dave Jones said that many homeowners and renters will have insurance coverage that helps with evacuation and relocation costs, often without any deductible to take into consideration. So, in some cases, insurers will be paying out for wildfire relocation costs even where homes are not damaged at all.

“It is imperative residents are aware of every resource available to them to recover from the emotional and financial burden caused by wildfires and to get their lives back on track,” Jones said. “Insurance coverage is meant to protect consumers from the devastating financial effects of wildfires and other disasters.”