Red flag warnings have been raised for a severe risk of spreading wildfires in the northern California region today, an area where insurance and reinsurance interests are particularly exposed to fire damage and the current wildfires are putting as much as $65 billion of property value at risk.

The wildfires have already destroyed thousands of structures in California, particularly the city of Santa Rosa, and further damage is possible over the next 24 hours, as the weather service warns of possible red flag conditions which could result in fires developing and spreading rapidly. 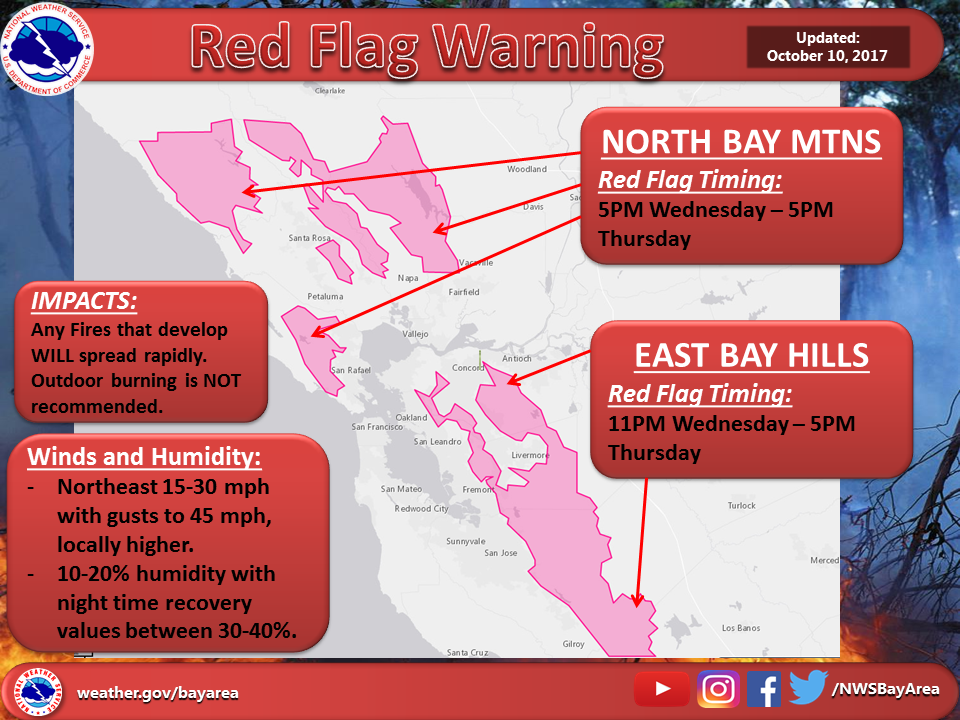 Weather forecasters say that strong winds moving in behind a weather front will result in “elevated-to-critical fire weather threats to active fires across northern California on Wednesday.”

With many fires still burning and barely contained, the threat of further critical fire weather could exacerbate the eventual impact from resulting losses to the insurance and reinsurance sector.

With wildfires still burning in the wine region area around Napa Valley and Santa Rosa still at risk, there is a chance that any elevated fire weather activity could bring further damage and loss of life.

The map below shows the current locations and perimeters of wildfires in the Napa, Sonoma, Santa Rosa region of the Bay Area. 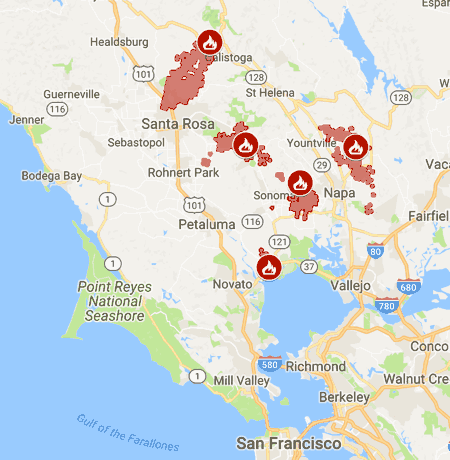 Risk modelling firm RMS said that its analysis shows that there were around 15,000 properties in the burn area on Sunday night into Monday, although not all structures will be damaged.

Kevin Van Leer, an RMS expert on wildfire, commented; “The 14 fires burning across swaths of eight counties in Northern California were spread quickly by Diablo wind gusts up to 70 mph overnight. These strong winds caused the fires to spread quickly: the Tubbs Fire grew from 200 acres on Sunday night to over 20,000 acres by Monday morning and is now over 27,000 acres. The Tubbs Fire (just north of Santa Rosa) and the Atlas Peak Fire (just north of Napa) have destroyed over 50,000 acres of land combined, and impacted several wineries along with residential and commercial structures. Thus far, 1,500 structures are reportedly destroyed, making this at least the 5th most destructive fire in California history.

“RMS analysis shows that there are approximately 15,000 structures in the overlap of the burn area and exposure, though not all structures within the footprint will be damaged. In addition to the burned structure damage, smoke may also be a major source of loss from this event. RMS is monitoring the latest satellite imagery and local reports to understand the scope of burned structures and damaging smoke.”

Meanwhile, risk modeller and catastrophe data analysts at CoreLogic said that its analysis shows as many as 172,117 homes with a combined reconstruction cost value (RCV) of over $65 billion as at some level of risk from the wildfires in the Napa and Santa Rosa metropolitan areas.

Across the whole of California, CoreLogic puts as much as $3.1 trillion of property at some level of risk from wildfires.

In the Napa and Santa Rosa areas, 11,058 homes with an estimated RCV of over $5 billion are at significant risk of damage, according to CoreLogic data.

That demonstrates the potential for a major insurance and reinsurance loss from these Californian wildfires, should the critical fire weather occur and cause existing fires to spread rapidly, while new fires burn as well.

Analysts at Keefe, Bruyette & Woods (KBW) said that the wildfires in California would likely result in industry losses well below $5 billion, but that some primary insurers could see their earnings affected.

KBW said that the majority of the loss would likely fall to insurance, rather than reinsurance capital, although given the proliferation of multi-peril aggregate reinsurance and ILS or collateralized contracts there is always the chance of some experiencing further deductible erosion, or losses, due to these wildfires.

KBW also said that the California wildfires could cause “modest insured losses in a few other lines as well”, citing personal and commercial auto, inland marine, and crop claims due to damaged vineyards and wineries.

Farmers Insurance, State Farm, Liberty, Allstate, Travelers, Nationwide Mutual, Chubb, AIG, Tokio Marine, National General, Allianz and QBE, are all considered among the top property insurers in the state of California, so likely to the insurers taking the bulk of the losses from these wildfire events.

Update: Latest reports put the number of structures destroyed in these fires at over 3,500, which could make the combined impacts of the fires on the insurance and reinsurance sector at least a top 5 U.S. wildfire loss event.