California wildfires in 2021 have destroyed or damaged 3,500 structures

Wildfires burning in California in the current season have now either damaged or completely destroyed more than 3,500 structures, according to the latest data from Cal Fire. 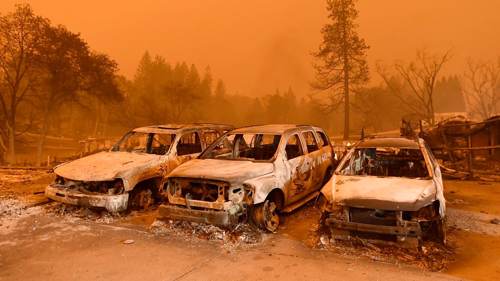 The wildfire season in California has been particularly active again, even though the accepted peak of the season is just approaching.

As of the end of September, 7,758 wildfire incidents had between them burned close to 2.5 million acres of land.

However, in 2021, the number of fatalities from wildfires in California is so far just 3, which is far below recent seasons.

Property damage continues even with recent progress being made in controlling blazes by fire-fighters.

Cal Fire said that 3,524 structures have so far been destroyed, a mix of residential and commercial property, as well as other farm buildings.

The most impactful wildfires of 2021 so far are the Dixie and Caldor fires, both of which are still burning but 94% and 83% contained respectively.

The Dixie fire, which burned in Butte, Lassen, Plumas, Shasta and Tehama counties, is the second-largest California wildfire on-record, at more than 963,300 acres.

The Dixie fire burned through and destroyed 1,329 structures, damaging another 95 others.

The Caldor fire in El Dorado, Amador and Alpine counties burned almost 222,000 acres and destroyed 1,003 structures, with another 81 structures damaged.

Both the Dixie and Caldor wildfires feature in the top-20 most destructive California wildfires on record.

While the season has certainly been impactful, its costs for the insurance and reinsurance industry are still mounting and there is some way to go before the fire season ends.

Traditionally the season would begin in June and end in November, with October often the peak.

But now, the wildfire season has been seen to drag on well into December in some years, with drier Novembers also becoming considered a peak month.

Adding that, “The damage to structures and national parks in California by wildfires in September alone suggests a non-negligible financial toll.”

However, the broker’s team is not yet being drawn on potential insurance and reinsurance market losses from the California wildfire season so far, only giving an economic loss estimation.

Saying that September’s wildfire burning will “add to a combined cost of wildfire damage in California YTD which was anticipated to result in a multi-billion-dollar (USD) economic loss.”

There is a way to go for the 2021 wildfire season in California and in the rest of the US western states, so plenty of opportunity for insured losses to rise further.

Availability of wildfire insurance and reinsurance continues to be affected, with prices also seen to rise.

As we explained yesterday, the latest wildfire catastrophe bond has just priced with a particularly significant multiple, showing that ILS rates for wildfire risk are also up year-on-year.