The southern California wildfires have now completely destroyed over 1,200 structures in the most recent December outbreaks, with another 350+ structures damaged. The largest and most damaging Thomas wildfire is still only 25% contained and weather remains conducive to burning, although the Santa Ana winds have lessened. 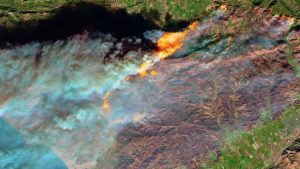 In our last update on the December wildfires in southern California we explained that in total more than 1,000 structures had been completely destroyed with another 300+ structures reported to have been damaged by the blazes.

As of yesterday evening the number had risen to more than 1,200 structures destroyed and another 350+ damaged by the fires, with the Thomas wildfire still impacting certain residential areas and only 25% contained by firefighters.

The Thomas wildfire has now become the fifth largest wildfire in California history, having burned a huge 236,000 acres. 904 structures have now been destroyed by the Thomas fire, with another 196 damaged.

That’s a total of 1,203 structures destroyed as of yesterday evening local time, with 356 damaged by the recent wildfires.

We’re likely to see some reinsurance and retrocession reserves being established as a result of these wildfires, particularly for aggregate structures which have been impacted by numerous recent catastrophe loss events.

Accuweather recently estimated that the total economic costs from the 2017 wildfires in California could be as high as $180 billion, as reported by our sister publication.

With insurance and reinsurance loss estimates suggesting an industry impact of at least $10 billion from the October wildfires in California (perhaps as high as $12b to $15b) and another few billion dollars of loss possible from the December fires, it’s perhaps feasible to suggest that the re/insurance industry may end up covering close to 10% of the total economic costs, once again highlighting an enormous protection gap.

The north California and wine region wildfires destroyed some 8,000+ structures and with the costs to the re/insurance industry seen as $10 billion or perhaps more, it seems safe to assume this December outbreak will see industry losses reaching into the low billions of dollars.

The industry loss from December’s fires will not become clear for some time now, as claims are still being filed and insurers are only just beginning to tally their impacts.