Impact Forecasting, the catastrophe risk modelling unit of reinsurance broker Aon Benfield, has said that severe weather and flooding in the U.S. in January is expected to result in an insurance and reinsurance industry loss in the billions of dollars. 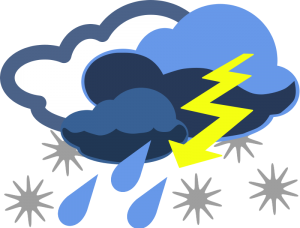 Impact Forecasting’s latest Global Catastrophe Recap Report (which you can download here) highlights a number of severe weather outbreaks that took place across the U.S. in January 2017, along with flooding and severe winter weather, which is expected to result in a “billion-dollar cost” for insurers and reinsurers.

Severe weather, which means convective events such as thunderstorms, hail events and so on, outbreaks during the month impacted numerous U.S. states, with Georgia, Mississippi, Alabama, Louisiana, and Florida being particularly impacted.

The group of severe weather outbreaks claimed 27 lives and is expected to incur economic losses of more than $1 billion, and an insurance or reinsurance industry loss in the hundreds of millions of dollars, at least.

Flash flooding, mudslides and debris flows as a result of consecutive and intense winter storms caused extreme precipitation across the U.S. West, with the most substantial damage occurring in California, says Impact Forecasting.

According to the report, this event alone is expected to result in economic losses of around $700 million, and insured losses of roughly $300 million.

“January proved to be a highly active month for global natural hazards compared to recent years, especially when we look at the events in the US, where the powerful thunderstorms and winter storms had a devastating effect on people and communities, as well as causing a significant economic loss for country.

“Our Impact Forecasting team continues to evaluate such events globally to assist insurers to assess their exposures, and develops catastrophe models that help people to better understand and quantify the inherent risks,” said Steve Bowen, Director and Meteorologist, Impact Forecasting.

Outside of the U.S. the report highlights major flooding in parts of Peru, Southern Africa, China, Philippines, and French Polynesia, earthquakes in Italy, and the worst wildfires Chile has ever witnessed.

Furthermore, intense and widespread flooding in southern Thailand is expected to result in economic losses of approximately $860 million, while extreme winter weather in parts of Europe is expected to drive insurance industry losses of some $170 million, according to the report.

Once again the year starts with high-enough losses that could strike some ILS fund managers, given the broad exposure to U.S. severe weather events these days. As ILS participates increasingly deeply in U.S. insurance and reinsurance markets, we should expect any billion dollar month to at least threaten some contracts ILS managers have invested in with, at the least, attritional losses.