Use of insurance-linked securities (ILS) such as catastrophe bonds increased among Bermuda-based insurance and reinsurance firms  in 2021, according to recent data collected by the Bermuda Monetary Authority (BMA).

Reinsurance and capital market sources of risk capacity are significant in providing this protection, but their use has changed again in the last year of data available, aligned with market forces that affected reinsurance over that year, as well as buyer motivations, all influenced by the cost-of-risk-capital and pricing.

Explaining that recent global events, from Russia’s war in Ukraine, to spiralling inflation, economic factors and catastrophe events constituted an earnings, rather than capital event, for Bermuda’s insurance and reinsurance market, the Bermuda Monetary Authority (BMA) highlights the importance of reinsurance capital to the market on the island.

In 2021, Bermuda’s re/insurers grew their market shares of catastrophe peril risks, with almost $210 billion of exposure reported at the end of that year, up from $193 billion the year before.

Overall, the use of reinsurance is widespread in the Bermuda market, the regulator explained, highlighting that its use is more pronounced for lower frequency return periods across the key North Atlantic hurricane and US earthquake perils.

Stress tests show, like in previous years, that Bermuda’s re/insurers are resilient to most scenarios, including financial market, catastrophe and other underwriting losses, helped by their solvency capital levels and ample use of reinsurance as well.

The Bermuda market is estimated to have a roughly 26% global market share of exposure for the main catastrophe perils, while gross loss exposure rose 8% in the year and ceded losses 7%.

It’s important to note, that the BMA’s data does not include special purpose insurers (SPI’s) so does not reflect the entirety of the cat risk assumed by the market.

While exposures have been increasing among the Bermuda based insurance and reinsurance companies, their use of risk capital suggests a greater degree of hedging using insurance-linked securities (ILS) such as catastrophe bonds.

For 2021, the aggregate occurrence limit protected by property retro contracts fell to 5.7%, down from 9.7% the year prior.

It will be interesting to see where these figures head to for 2022, given the contraction of retro markets and the higher costs-of-capital evident in ILS and traditional reinsurance.

Use of straight property catastrophe contracts fell by 1.6% over the year, with this likely flowing into ILS and quota shares, we suspect. 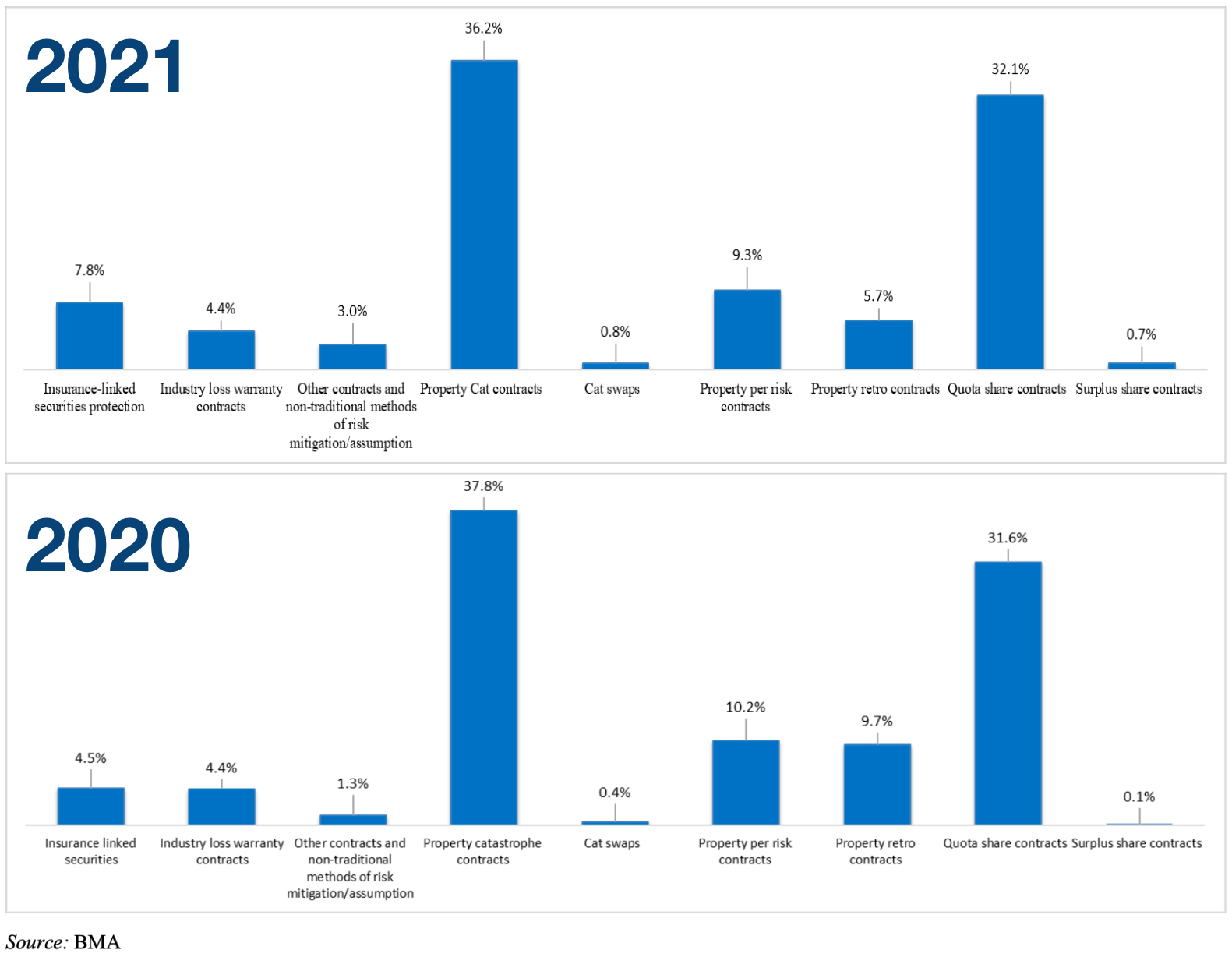 Overall, the BMA concludes that re/insurers’ reliance on reinsurance increased by around 7% in 2021, although that is in line with the greater exposures assumed by carriers in the Bermuda market last year.

On average, 63% of gross losses were ceded by re/insurers in Bermuda in 2021, which is roughly the same as the prior year, the BMA said.

The data collected by the BMA shows that Bermuda’s insurance and reinsurance market is both growing in stature globally, while also remaining well-protected through use of risk and reinsurance capital.