Global insurance and reinsurance market catastrophe losses came in some 16% below the long-term average, but there could still be implications for aggregate contracts, as frequent smaller events occurred, according to analysts at investment bank Jefferies. 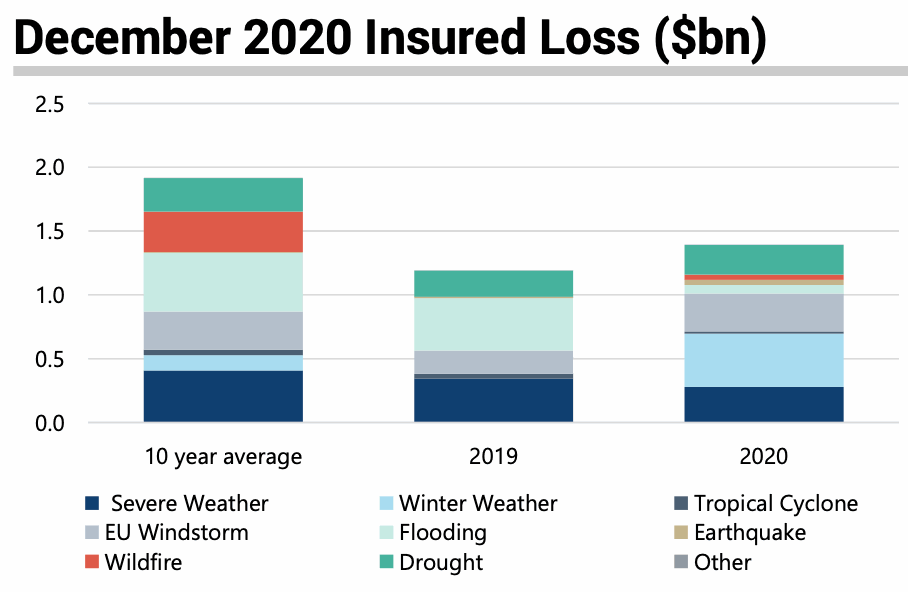 December 2020 ended the year with a much lower level of insured catastrophe losses, after a more expensive few months prior to that due to hurricanes and wildfire events.

But, the analysts also warn that aggregate reinsurance layers on-risk through 2020 may still not be out of the woods.

December 2020 was “relatively benign” Jefferies analyst team has said, with winter weather and severe storms, including European windstorms, featuring as the most notable perils and driving the bulk of losses, as would be expected during the month.

The most notable single event was Windstorm Bella in Europe, which Jefferies analysts estimate will cost insurance firms $294 million.

As a result, that takes European catastrophe insured losses above the aggregate for EMEA winter weather at $215 million, but Jefferies notes that it’s important to consider the aggregation of smaller events, which as December’s data shows “can be a highly material part of the total cost.”

While the, “rising frequency of small severe and winter weather events this year may have led to a higher proportion of losses remaining on insurers’ balance sheets,” according to the analysts.

They also warn that, “aggregation of small losses may see that trend shift in 4Q if aggregate reinsurance covers are reached resulting in catastrophe ratios slightly exceeding budget.”

Overall, Jefferies put December’s insured catastrophe and severe weather losses at around $1.4 billion, with U.S. severe and winter weather expected to be the source of the majority of these losses.

That’s higher than December 2019, but well under the ten-year average for the month of around $1.9 billion of insurance and reinsurance market losses.

We understand from sources that some aggregate reinsurance covers have been very close to triggering as 2020 drew to a close and it might take final estimates to be available on some loss events before their fate is clearly understood.

However, even if these exposed aggregate reinsurance layers do trigger, the erosion of coverage they provide is not anticipated to be too significant, or create too big a hit for any markets.