Despite the fact AXIS Capital significantly increased its fee income earned from third-party capital sources in 2019, the firms assets from ILS style investors shrank over the course of the year and the company began 2020 with less of this type of investor capital than a year earlier.

Bermuda-based specialist insurance and reinsurance firm AXIS Capital had reported that it ceded 27% more in premiums to third-party capital partners in 2019 and as a result earned a huge 66% more in fee income during the process, as we reported recently here.

AXIS has been using funding from so-called strategic capital partners as one of its levers to reduce volatility within its business, while earning fee income at the same time.

The company feels that this is helping it to deliver better risk-adjusted returns to its shareholders, while lowering its probable maximum losses (PML’s) and having now taken its third-party capital to over $2 billion, the contribution has become more meaningful.

However, while overall third-party capital in the AXIS Capital business has been growing, helping it to earn increased fees, there has been something of a reversal of that trend during 2019 in some specific areas of the strategic capital partner operation.

Some of these areas of activity are growing, but some have also shrunk back in the last year.

Harrington Re is a notable area of growth, having grown to more around $1.1 billion it seems at January 1st 2020, adding somewhere between $100 million and $200 million of assets over the second-half of last year, our estimates suggest.

Also having grown in the last year is AXIS’ newer collateralised reinsurance sidecar vehicle Alturas Re.

The Alturas Re sidecar was $169 million in size at the middle of 2019, but after fresh issues for 2020 of a $64.14 million catastrophe reinsurance tranche and a $47.25 million property insurance tranche, this vehicle has grown again.

Alturas Re now has roughly $275 million of sidecar notes in issue, across five tranches, at this time.

But at the same time, AXIS Capital’s insurance-linked securities (ILS) fund management related and private ILS partnership platform AXIS Ventures Reinsurance Limited seems to have shrunk, perhaps down to less than $500 million under management at 1/1 2020.

It’s hard to say exactly how much capital is under management under this strategy, as we only have charts AXIS shares in investor presentations to go on, but looking at the chart further down this article, the AXIS Ventures Re asset base is certainly smaller than it was a year ago.

The “other strategic partners” grouping of assets (somewhere around $350m we believe), which we think accounts for other private quota share and direct ILS deals with external investors and capital partners, has remained relatively static over the course of the last year, again judging from the chart below.

But what the chart below clearly shows, is that overall the strategic capital partner assets at AXIS features less of what we’d typically consider “ILS capital” at the beginning of 2020, largely due to the clear shrinking of assets in the AXIS Ventures Re vehicle. 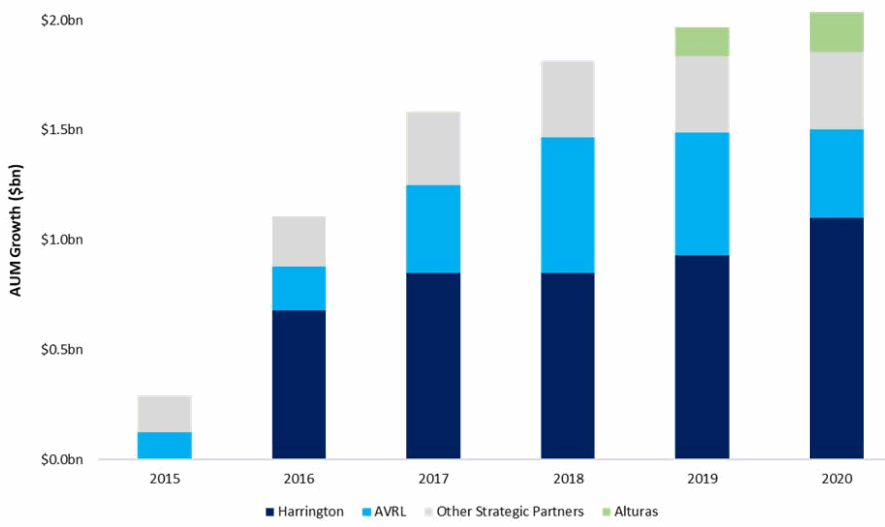 It’s likely that catastrophe loss activity and loss creep may be part of the reason for this, as some of the private ILS structures AXIS entered into with investors have been hit by losses over recent years.

The fact the capital base shrank at AXS Ventures Re is likely simply a reflection of loss activity and the fact it takes time to refill some of these gaps, especially where investors supporting such quota shares and the like have been experiencing continued loss-related issues across multiple relationships.

Hence the underlying story may be more one of the time it takes to reload some of these partnerships, rather than them having gone away completely. But it will be interesting to see whether AXIS Capital’s more ILS style third-party assets bounce back and the mix changes again in quarters to come.