Guy Carpenter have published an interesting graph as part of their 2010 Catastrophe Update (which you can read on their GCCapitalIdeas.com blog). The graph displays insured losses for man-made disasters and natural catastrophes by year and also shows the 10 year moving average.

Given the recent quiet hurricane seasons you may think that the 10 year average could be flattening off. Well it isn’t, it’s rising all the time and has been since the late 1980’s. This is a great signal of the rising value of exposed and insured property in the world. As the developing world improves its infrastructure and insurance penetration increases, this line is only going to keep rising and may well accelerate in coming years especially as markets such as China and India increase insurance take-up. 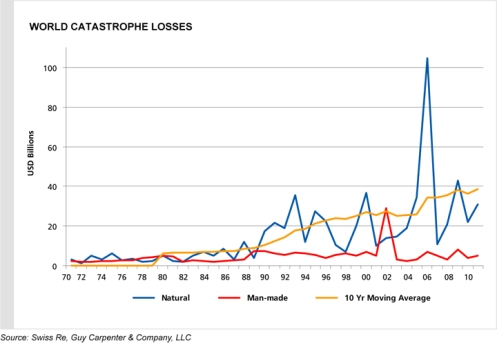 It’s this 10 year moving average that really demonstrates the job that risk transfer has to do and how much it is needed. It would be really interesting to compare it with a line for the 10 year moving average of economic losses from disasters, we suspect that figure may be growing quicker than the insured loss average as insurance penetration tends to lag behind development in emerging markets.