PERILS AG, the provider of industry loss data and indices for use as risk transfer triggers, has reported healthy growth in the limits at risk using its services, expanding them 17% over the last year to reach $3.1 billion, with the growth attributed to expansion into Australia and Turkey.

PERILS launched its Australia service a year ago and has already seen $1.384 billion of limits at risk placed using its data services. The PERILS Turkey service was launched in November 2015 and currently there are $227 million of PERILS based limits at risk there. 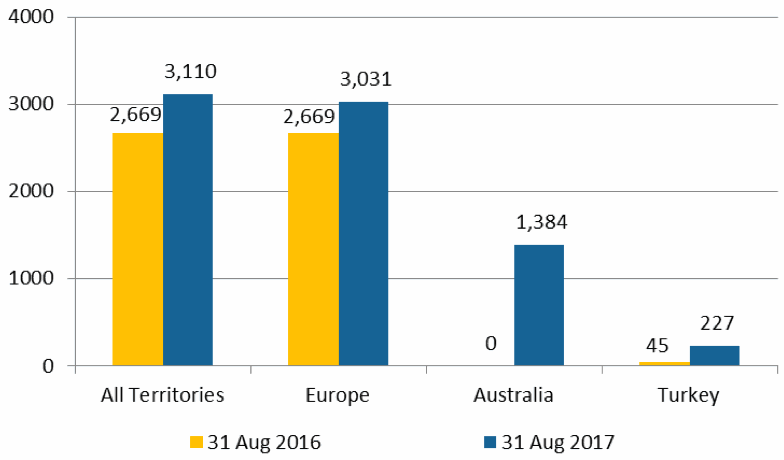 Adding new territories to its coverage has helped PERILS to achieve growth, but its core market of Europe has also seen limits placed increase as well.

In total, since its launch at 1 Jan 2010, total PERILS-based limits at risk since that time currently stands at $14.5, consisting of over 200 individual transactions, including insurance-linked securities (ILS), catastrophe bonds and industry loss warranties (ILW).

Luzi Hitz, CEO of PERILS, commented; “The main goal of the addition of Turkey and Australia to our market coverage was to facilitate industry-loss-based risk transactions also in these territories, both highly exposed to a range of natural catastrophes. It is extremely satisfying that already there are clear signs that we are achieving what we set out to achieve in these territories.”

Eduard Held, Head of Products, added; “The systematic collection and provision of high-quality insurance industry data facilitates additional capacity and increases the efficiency of the risk transfer markets. In Australia, to date PERILS data has facilitated a total of nine transactions, which represent both multi-peril and standalone deals. This clearly demonstrates that the data which we provide has met a clear market need and we hope that it will stimulate further activity in the risk transfer sector moving forward.”

Of the $3.1 billion of PERILS based limits at risk, 88% are reinsurance and retrocession transactions based on structured or weighted triggers, while just 12% use a plain vanilla industry loss trigger.

PERILS CEO Hitz told Artemis that the company has seen a continued shift towards retrocession use of its industry loss triggers, over reinsurance. With 89% of the entire PERILS-based limits at risk now retrocession focused.

PERILS has also expanded to Canada earlier this year, through a partnership with Catastrophe Indices & Quantification Inc. (CatIQ) to provide industry loss data for Canada, but so far there have been no transactions issued based on PERILS data.

PERILS has also joined the NatCatDAX Alliance which will likely see it providing exposure databases and ultimately calculating industry loss data for some regions of Asia as well in the future.

The steady expansion of coverage means that multi-region transactions are increasingly possible and PERILS is seeing some growth in this area as well, according to Hitz.

Finally, PERILS is looking to expand again, with New Zealand now firmly in its sights and being worked on, according to Hitz.

PERILS-based reinsurance and retrocession coverage is utilised by ILS markets and alternative capital providers, with some providing capacity to such transactions and others seeking industry loss based coverage.