The 2013 Atlantic Hurricane Season begins tomorrow and runs for six months, from June 1st until the end of November, and the tropics are already looking ripe for storm development according to a number of forecasting models. Forecasters predict an active season in 2013 and conditions look conducive to storm development we could see the first tropical disturbance of the season as early as next week.

Both Accuweather and Weather Trends International have said today that the Gulf of Mexico looks to have ideal conditions for storm development right now. A low pressure system in the Bay of Campeche, which is largely composed of the remnants of hurricane Barbara which struck Mexico from the Pacific side, could develop over the coming days and then head north towards the U.S.

Neither forecaster will be drawn on the potential for this disturbance to develop, with both saying that it could take a number of days for the area of low pressure to form into a depression or tropical storm.

Accuweather suggests that the greatest potential for impact from any storm that forms would be in the eastern and northern Gulf of Mexico, including the west coast of Florida, the panhandle and eastern Louisiana including New Orleans.

Weather Trends International agrees, saying that the system is expected to impact somewhere along the Gulf Coast from New Orleans to Tampa late next week. It also says that if the storm does develop and head for the coastline to expect a rainfall and flooding event rather than a wind event. It expects the storm to move inland and track northwards with the threat of flooding diminishing as it goes.

AccuWeather.com meteorologist Dan Kottlowski said; “Next week or next weekend, around the seventh or eighth of June, we could end up with an organized tropical system in the Gulf of Mexico. I would advise people in northern and eastern portions of the Gulf of Mexico to be in touch with the weather next week.”

With the 2013 Atlantic Hurricane Season only beginning tomorrow there is a long six months of potential storm activity ahead. Judging from the forecast these two firms have suggested for next week it is clear that the Gulf looks primed to develop storms. It’s early days and any storms forming this early in the season tend not to attain hurricane status. But it does serve as a good reminder of what lies ahead of the insurance, reinsurance and catastrophe bond market over the next six months.

Keep in touch with the season as it develops with our 2013 Atlantic Hurricane Season page.

Both forecasters have graphics up on the stories on this potential storm which we’ve included below for reference. 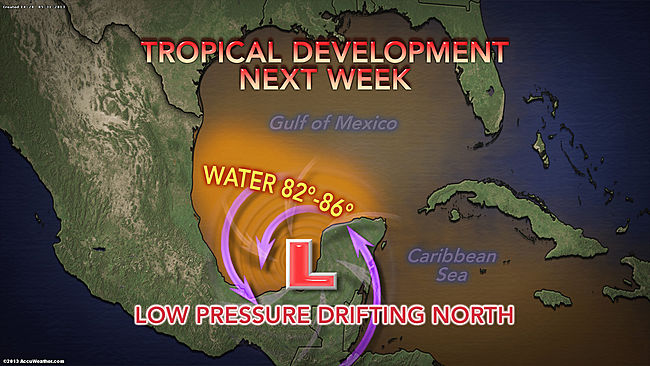 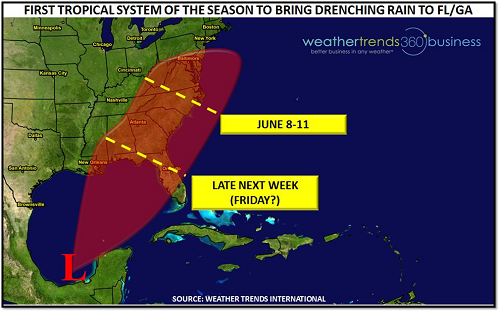