Compared with more developed regions, the Asian insurance and reinsurance market remains small, resulting in less concentration and focus on the tail risk. However, when penetration grows and the tail risk becomes more important there ILS’ role in Asia will grow, says Lixin Zeng. 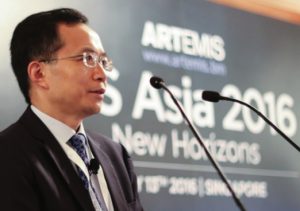 “The tail risk, the concentration to the tail risk, is very important in determining the premium of reinsurance cost,” said Zeng. The Asian insurance, reinsurance and ILS market is an emerging one, and when compared to more mature markets in the U.S. and Europe, for example, insurance penetration across Asia is dangerously low.

As a result of the smaller market size and resulting reduced importance and focus on the tail risk in Asia, Zeng explained that Asian cedents “don’t really need to bother with ILS, because the traditional market is very affordable,” said Zeng.

It’s an interesting point, and while ILS capacity is by no means meaningful in the Asian market, catastrophe bonds that cover Japanese and Chinese risks have been issued in the past, so it’s certainly not unheard of, but there is definitely room for expansion.

The $50 million Panda Re Ltd. (Series 2015-1) transaction was the first catastrophe bond that covered Chinese earthquake risk, and was sponsored by China Property and Casualty Reinsurance Company (China Re).

“However, in a 5x or 10x growth scenario for Asia the tail risk is going to be so much bigger, and the traditional reinsurance market will have to increase the premium rate to make their capital model work,” continued Zeng.

Numerous industry experts and executives have described Asia as an emerging market with vast growth potential. The region hosts some of the lowest insurance penetration rates seen anywhere in the world, so it’s unsurprising that Zeng told conference attendees that Asia accounts for just 7% of reinsurance limit purchased globally.

Increasing insurance penetration in Asia will require various elements of the risk transfer landscape to advance, collaborate, and commit to the task, including risk modellers, insurers, reinsurers, brokers, ILS players, and also the support of government entities.

“The rapid growth will increase; it’s not a matter of if, it’s a matter of when we increase the tail contribution of the Asian risk to the global reinsurance market.

“And as a result, ILS is well positioned to support the growth. We have already observed the impact that ILS has on the peak zone markets, and when the Asian market reaches that stage, ILS will play a very important role,” explained Zeng.

Essentially, then, as insurance penetration increases in Asia so to will the need of primary players to focus on the tail risk, resulting in a need to utilise greater reinsurance protection and, where there’s an increased demand for reinsurance there is often an opportunity for ILS to play a part.

“It is important for Asian cedents to get familiar with and to start building some relationships with ILS and capital markets, that way when the growth (in tail risk) materialises, the ILS managers are ready to provide capital support for Asian business,” said Zeng.

Artemis ILS Asia will be back in Singapore in July 2017. We hope to see you there!