Bermuda headquartered insurance and reinsurance firm Arch Capital Group has increased the amount of third-party capital under its management in insurance-linked securities (ILS) related assets by 20% to $600 million in the last year.

As of last August Arch had $500 million of ILS and reinsurance-linked assets under management, so the amount of capital managed has grown by 20% in around less than one year.

Arch continues to make use of its Arch Re underwriting platform to provide third-party investors with access to reinsurance-linked returns and Artemis understands from sources that these efforts are in the process of becoming more formalised, perhaps leading to the establishment of a dedicated unit to expand Arch’s management of ILS capital.

Arch has a platform with multiple forms of capital involved currently, thanks to its traditional Arch Re underwriting operations, its third-party capitalised and total return strategy reinsurer Watford Re, its sponsorship of the $510 million launch of Premia Re which has a run-off focus, as well as the now $600 million of ILS assets under management that see Arch sharing access to risk with investors.

The use of different forms of capital has helped Arch to expand its underwriting in recent years, as evidenced by the chart below of Arch’s written premium. 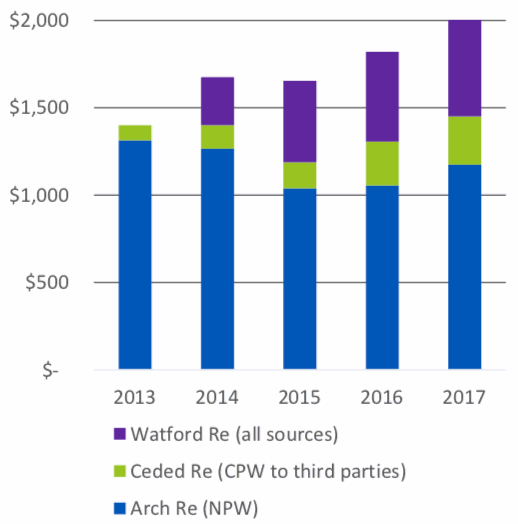 So as a result there is a significant input to Arch’s earnings from third-party capitalised vehicles now and Arch clearly recognises the need for this multiple balance-sheet approach, as we’re told that the company is working on developing and expanding its ILS management capabilities currently.

At the firm’s investor day this week, Arch reportedly said that it would look to leverage third-party capital more going forwards, including across the insurance side of the business where it feels lines of business are not adequately priced for its own balance-sheet capital.

Arch has been doing the same in property catastrophe risks, where underwriting returns are not always strong enough for its own balance-sheet, making the use of third-party capital an attractive option.

Additionally, Arch is also tapping capital market investors for its own reinsurance and retrocession, of course, including through the series of mortgage ILS bond issuances under the Bellemeade Re name.

Arch has previously explained that the use of its reinsurance underwriting platform alongside third-party capital is a key lever for remaining resilient throughout the reinsurance cycle, while also allowing the firm to manage and reduce its net realistic disaster scenario loss potential.

We understand from sources that Arch will look to expand these ILS activities in years to come, an unsurprising fact given the way the reinsurance market is moving.

It’s also interesting to consider how Arch is innovating, with one example being its mortgage risk transfer arrangement with Freddie Mac, that perhaps gives us a glimpse of the long-term goals at the firm.

Arch has always said that it is interested in managing more third-party capital, alongside its own, and as we understand it from our sources work is now underway to provide the foundations for a unit to increase the firm’s focus in this area.