The use of third-party, or alternative, capital and the expansion of insurance-linked securities (ILS), such as catastrophe bonds and collateralized reinsurance into Latin American markets is currently constrained, meaning its participation remains low in the region. 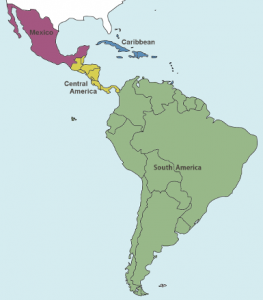 Latin American insurers and reinsurers are still facing problems accessing new sources of risk transfer capacity due to the limited data that is available for modelling and managing catastrophe risks in the region, according to a report from rating agency Fitch Ratings.

A lack of data on historical catastrophe losses, exposure data and a lower understanding of the risks, compared to markets such as the U.S., mean that the whole insurance and reinsurance market in Latin America is further behind its northern cousin.

Fitch believes that the available data and risk modelling capabilities needs to be augmented in order for alternative capital to truly penetrate the reinsurance market in Latin America, so South and Central countries.

The rating agency explained; “Modeling capabilities and compilation of more comprehensive statistics need to improve for alternative uses of capital to become more prevalent in the region.”

The insurance-linked securities (ILS) market and its capital market investors will have a role to play as this gradual expansion occurs, particularly given the high exposure to peak catastrophe risks such as earthquakes, floods, volcanic eruption, wildfires and more.

In fact, Fitch notes that some local re/insurers are already looking to increase their use of reinsurance; “The region’s vulnerability to natural disasters promotes continued demand for reinsurance. This, along with soft global reinsurance rates and a recent decline in the frequency and severity of natural catastrophes in the region, has resulted in several companies taking this advantage to expand their reinsurance coverage at a lower cost.”

But currently Fitch says that alternative capital is largely not an option for local insurers and reinsurers looking for risk transfer. One reason being that, given the limited penetration of insurance, local re/insurers have not yet needed to diversify their risk capital meaningfully.

“The reduced financial effect of natural catastrophes has influenced re/insurers to maintain a similar risk appetite and management strategy. That is why alternative capital or diversified sources of funding have not been a significant driver of excess capacity for the industry in Latin America. In addition, as supply growth continues to outpace reinsurance demand, companies do not face the need to reduce their dependence on reinsurers,” Fitch explains.

The rating agency cites a few examples, where ILS and alternative reinsurance capital have penetrated Latin America but says these are few and far between and largely catastrophe bonds.

Fitch again highlights the dearth of risk modelling and loss data, saying; “The accurate capture of insurance data is fundamental in ensuring adequate catastrophe protection. This limitation partially poses constraints in the use of alternative capital.”

However, it should be noted that this is not all of the reinsurance and risk transfer activity in Latin or South America that has been backed by alternative capital and ILS. Gradually there is participation in risks in the region by some of the largest ILS fund managers on a collateralized basis and this is expected to continue to increase steadily.

ILS managers have participated in underwriting some South American catastrophe reinsurance programs on a collateralized basis. At the moment the lines they put down here are small, but it begins to build the relationships in the region and the familiarity with alternative capital among the cedents there.

There have also been a number of weather risk transfer transactions in the region which have involved ILS markets as providers of capacity, including a huge $450m weather transaction in Uruguay that involved the largest ILS manager Nephila Capital. These weather deals are one way that ILS investors can tap into risks in the region.

It’s also worth considering the collateralized retrocession markets, which are also writing global covers for peak catastrophe risks and these will sometimes include exposures in Latin America and be backed by ILS or alternative capital.

So ILS and alternative capital activity in Latin America is growing, albeit in either specialised transactions or small participation’s in reinsurance renewals on a collateralized basis. This lays the groundwork for deeper participation in the regions risk transfer markets in the future.

Yes, at the moment there are factors that constrain or restrict the expansion of ILS and alternative capital into regions like Latin America, but there is activity despite the regions low insurance penetration.

Like Asia, Latin America and South America provide opportunity not just to traditional reinsurers but also to the ILS market and its investors. Not least in narrowing the very evident protection gap that exists in the region.

As re/insurance markets and the understanding of ILS and alternative risk transfer options grows in the region, we’d expect to see the amount of third-party reinsurance and ILS capital deployed there grow as well.