Alternative capital up, traditional down, as reinsurer profits shrink again

Alternative reinsurance capital’s continued growth through 2018, as well as the slight shrinking of traditional reinsurer capital have been confirmed in a report out today, while at the same time profits at reinsurers are seen to have shrunk again, based on underlying returns on equity (ROE’s).

Total dedicated global reinsurance sector capital was measured at $462 billion at the end of 2018, according to Willis Re’s latest report.

Shareholder equity of the 32 reinsurance companies tracked in the firms Willis Reinsurance Index fell by 10% to $335.7 billion, a reversal from the growth of 8% seen in 2017.

But alternative reinsurance capital, so that employed by insurance-linked securities (ILS) funds, collateralized reinsurers and other capital markets backed structures, expanded by 6% to reach $93 billion at the end of 2018. 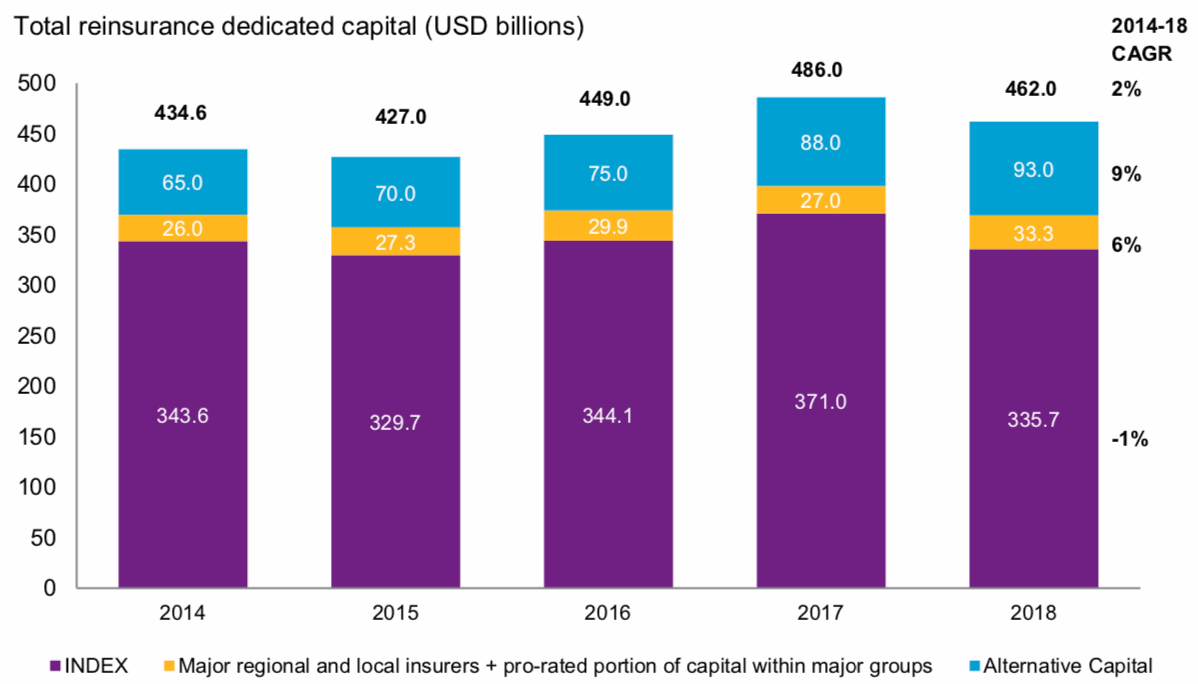 It’s interesting to see that by Willis Re’s measure, the compound growth rate of traditional reinsurance capital has actually been a slow decline since 2014, at -1%.

Where as, alternative reinsurance capital has achieved compound annual growth of an impressive 9% across the five-year period.

The main reasons that traditional capital shrank in 2018 were mergers and acquisitions (M&A) related shrinkage, largely the exits of Validus and XL Catlin as independent companies, as well as dividends and capital returns, plus unrealised investment depreciation, the broker explained.

The data confirms the growing importance of ILS and alternative capital in global reinsurance, as despite the expansion of major reinsurers, who continually grow their platforms and diversify into primary lines or other areas of risk, the overall capital they contribute between them has actually been shrinking across the five years since 2014.

This does imply rising expenses without rising capital bases for many in the sector, something that is perhaps reflected in Willis Re’s measure of return on equity (ROE) for a subset of the Reinsurance Index it tracks.

While reported ROE’s recovered in 2018 after the catastrophe loss heavy 2017 year, once normalised and after removing any benefit from reserve releases, the subset ROE for 2018 came out at just 2.7%, down from 3.8% for 2017 (as shown below). 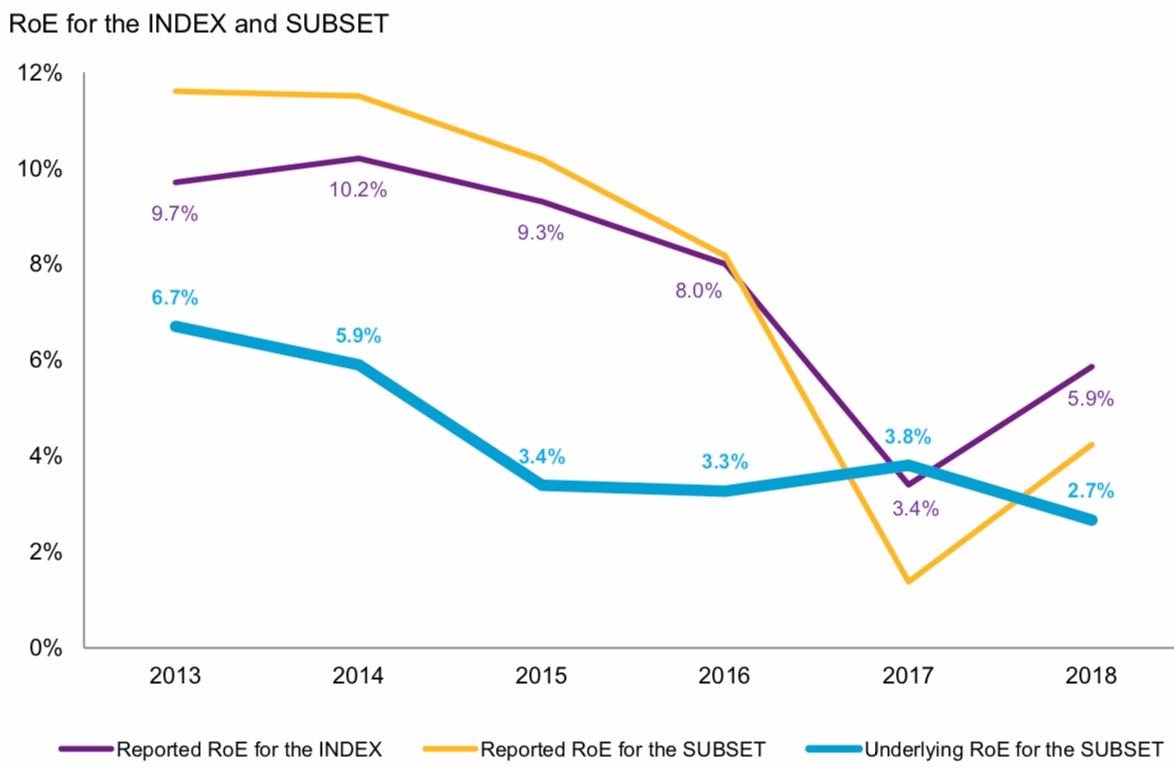 In fact, normalised returns on equity (ROE) for the subset of major reinsurance firms reached their lowest point in five years in 2018, continuing the steady decline as the business of being a reinsurer became increasingly less profitable.

Of course over that period major reinsurers have delighted their shareholders with capital returns and dividends still, hence the questions from major shareholders have perhaps not been as vigorous as they should have been.

But it’s clear from Willis Re’s research that being a reinsurer is not as profitable as it once was.

If you combine that fact with the compound shrinking of traditional reinsurer capital displayed in the first chart above, plus the fact major reinsurers are now using more third-party investor capital than ever before and paying a share of the underwriting profits for the privilege, it paints a picture of a less profitable business model where charging for their expertise can prove as valuable, but perhaps less financially rewarding, than being the ultimate risk bearer.

James Kent, Global CEO, Willis Re, commented, “Overall shareholders equity figures for the Index suffered a negative impact due to unrealised investment losses, owing to external factors largely beyond the control of risk carriers, as well as shareholder buy backs and dividends. The report’s findings show that the remedial actions taken by many risk carriers in 2018 were essential and we are seeing an acceleration of these actions in 2019 as companies seek improved underwriting terms and rates to drive RoEs.”

As the reinsurance business model continues to evolve, traditional reinsurers have to find a way to replace some of the profits they once earned by being the ultimate bearer of risk.

Yes, reinsurers are going to earn fee income for managing, servicing, sharing risk with, and originating for alternative capital and ILS investors.

At least not while there are so many points of ROE given away in the value-chain, that is.

Reinsurance firms have to find a way to recoup some of the ROE points relinquished in the value-chain, in order to boost their own ROE’s as they increasingly become servicers and managers of risk for others capital balance-sheets.

In our eyes that makes the brokers themselves the target for where ROE can be recovered from, given the high intermediation costs in the insurance and reinsurance industry.

But of course they hold the keys to origination (aside from the very largest re/insurers), so shrinking the intermediation costs is going to be difficult for some to achieve.

But this is where democratised technology platforms can help, by which we mean platforms that can allow a more level playing field, where risk and capital appetites are pitted against each other and transactions can be executed with less intermediation.

Ultimately this can help to raise the ROE of the industry, although whether it (insurtech) is enough on its own remains to be seen.

Expense in reinsurance has added around 3.8% to the sectors combined ratio since 2007, Willis Re explains in its report today, which the broker says is exerting downward pressure on profitability for reinsurers.

In fact, the expense ratio impact for the subset of major reinsurance firms was at its highest since 2007 last year, suggesting that for all the talk of efficiency in the industry the traditional reinsurer business model is not getting any more so. 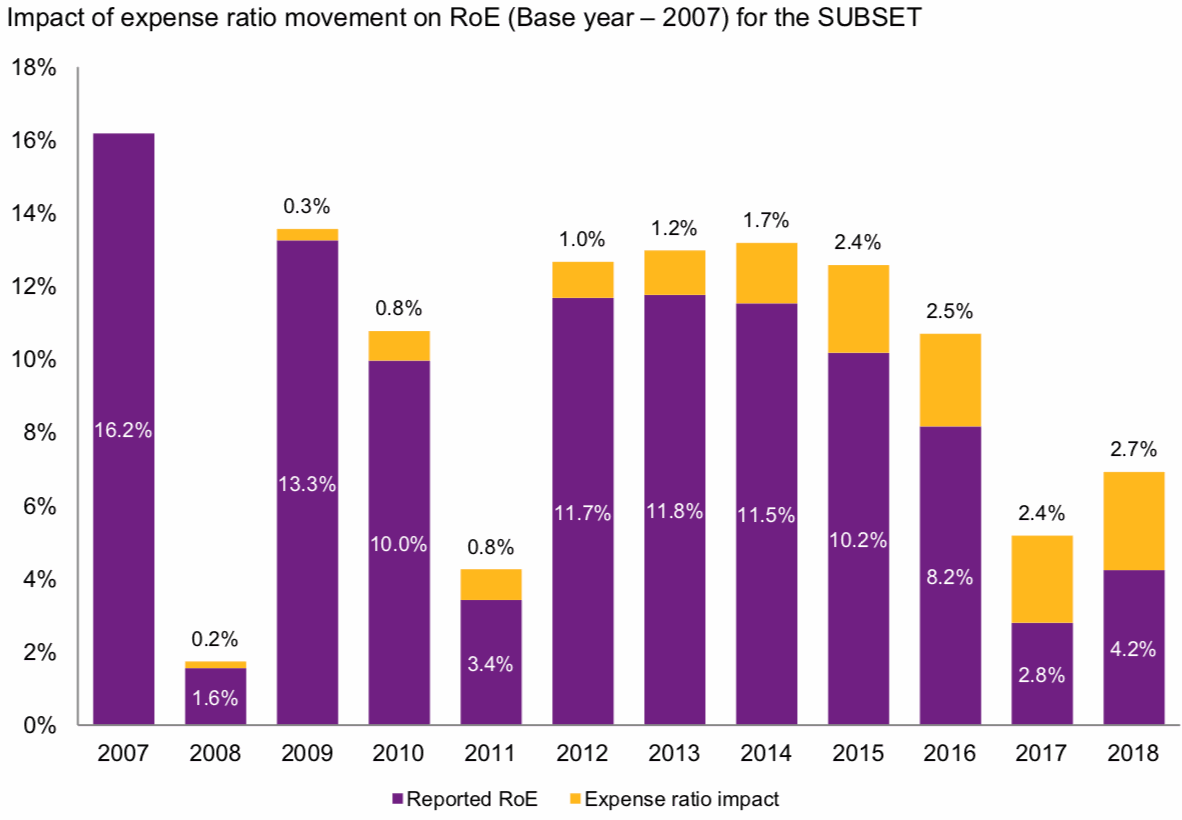 While we’ve talked about reinsurance evolving over recent years, the business model itself needs to evolve further to ensure its future relevance.

All but the very largest are heading towards costs of capital and expense loads that will reduce their competitiveness, while the pressure on intermediation costs and other expenses that could be reduced are set to increase as a result.

While reinsurance has been said to be evolving for a couple of decades now, the industry may need to evolve just as much again in the next 20 years to stand a chance of delivering significantly better returns to its shareholder base.