Alternative reinsurance and retrocession capacity from the insurance-linked securities (ILS) and related collateralized markets is estimated to have remained flat at $91 billion at the end of 2018, while traditional reinsurance capacity rose slightly.

Broker JLT Re made an early estimate that overall dedicated reinsurance sector capital grew by 0.6% to $348 billion as of the end of the year, but all of that growth came from the traditional side of the market.

Traditional reinsurance capital is estimated to have increased by 0.8% from $255 billion to $257 billion by the end of 2018, but with alternative and ILS capital remaining static at $91 billion the market itself has barely grown in the last year. 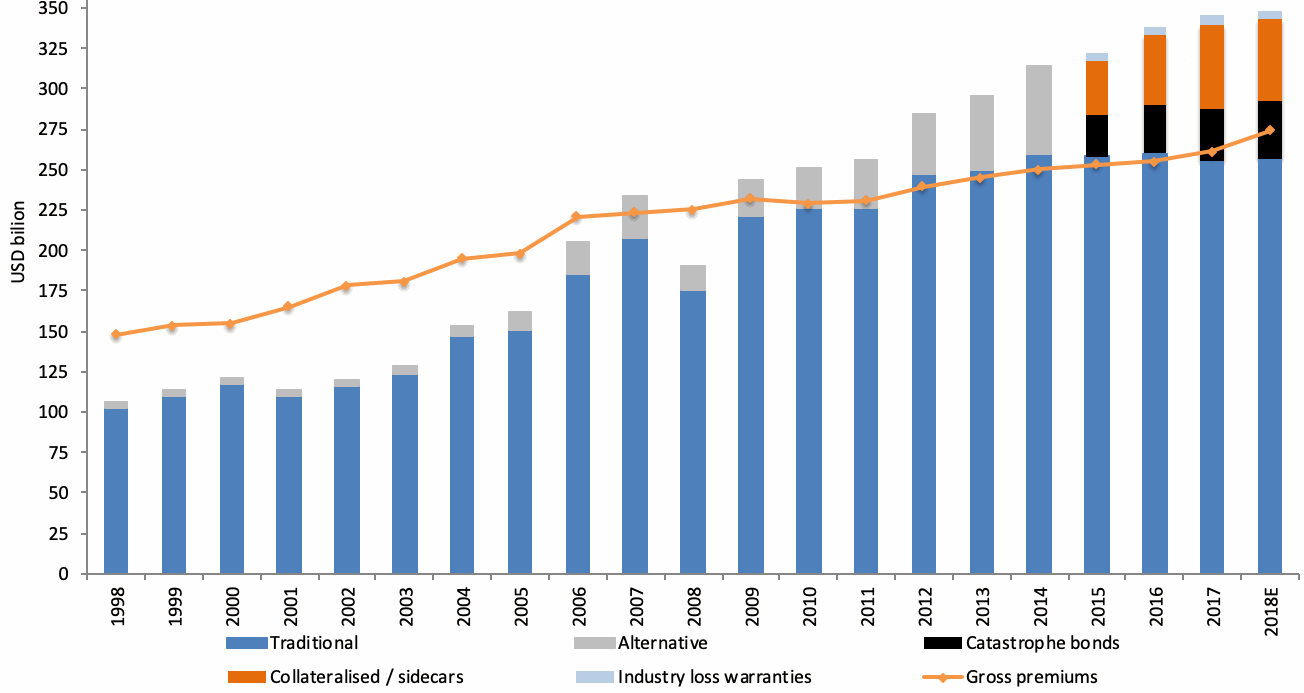 Helping market dynamics is the fact that reinsurance premiums increased more significantly, rising by almost 5% to an estimated $274 billion.

That shows that new demand has helped to absorb some of the excess capital in the industry, which may assist in balancing supply-demand factors as we move through the year.

JLT Re notes that the fact ILS fund capital has not risen is consistent with the way the renewal market responded, with tightening seen in retrocession and some other areas of reinsurance where ILS capital and capacity has been so prevalent.

“Some investors pulled back allocations due to what were perceived as disappointing returns throughout the year, continued loss creep from Hurricane Irma and another series of costly catastrophe losses in 2018,” the broker explained.

Interestingly, it is the collateralized reinsurance and retrocession chunk of the alternative capital market that has contracted at year-end, falling from $52 billion a year earlier to an estimated $50 billion.

At the same time the catastrophe bond and related securities market experienced strong growth in 2018, ending the year around $36 billion according to JLT Re’s data, or nearly $38 billion based on data from Artemis’ latest quarterly market report (which you can download here).

JLT Re also estimates that industry-loss warranty (ILW) capacity shrank slightly over 2018, finishing the year at $5 billion, down from $6 billion a year earlier.

It’s important to note that JLT Re’s figures are preliminary and subject to change, but the fact that alternative reinsurance capital is seen as relatively static is encouraging, as it shows that the ILS market remains a significant force in reinsurance and retrocession even after the losses and many of the ILS fund managers and collateralized vehicles will be well-positioned for future growth, once the influence of 2017 and 2018 catastrophes passes.

However, JLT Re also noted that, “It is important to stress that strong competition at 1 January 2019 ensured that placements, whilst late, were completed in good order for the most part and capacity was only pared back in areas where major losses occurred or where return hurdles were not met.”

That is a sign of discipline from the reinsurance and ILS marketplace and a realisation that rate increases are not going to appear unless warranted, by loss costs, price corrections, or where accounts have consistently underperformed.

“This is a market which has clearly matured since the days when large catastrophes created massive price volatility. The reinsurance sector today remains exceptionally well capitalised, even at a time of macroeconomic change and unprecedented catastrophe loss activity,” JLT Re continued.

Strong capacity levels persisted in reinsurance at the key January renewals, which helped to keep much of the market relatively flat, while property catastrophe risks saw rates decline further at 1/1, according to JLT Re’s data.

David Flandro, Global Head of Analytics at JLT Re, commented on the market, “Loss experiences and the macroeconomic environment will play an important role in shaping the reinsurance market in 2019. Another large-loss year could test the limits of carriers’ capital resilience, as well as investors’ appetite for reinsurance at a time of capital market volatility.

“Carriers’ balance sheets could also come under additional strain as the economic cycle shows signs of shifting for the first time since the immediate aftermath of the financial crisis. Reserving trends and asset leverage remain key sector drivers. After a prolonged period of low yields and disinflation, the spectre of sudden movements in interest rates and asset prices bring important supply implications.”