Alternative reinsurance capital for deployment into insurance-linked securities (ILS), collateralised contracts and catastrophe bonds was flat through the third-quarter of the year at $93 billion, but around $15 billion remained trapped at the end of September 2019, Aon believes.

These figures have not changed since the end of Q2 2019 and in fact, at the end of Q1 2019 Aon reported that alternative reinsurance capital amounted to $93 billion, so that figure had not changed in six months, reflecting a levelling out of loss creep and the first signs of a recovery for the sector as conditions stabilised.

At the end of 2018 alternative reinsurance and ILS capital sat 4% higher at $97 billion, but that declined to the $93 billion during the first-quarter of 2019, where it has sat ever since. 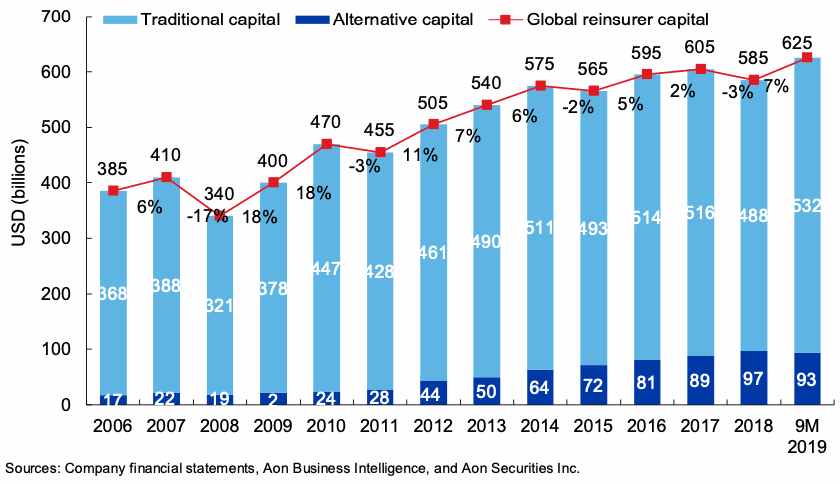 The amount of alternative capital and ILS collateral that was trapped did not change over the third-quarter either, remaining at around $15 billion by Aon estimates.

On the other side of the market, traditional reinsurance capital has risen strongly, to recover from a decline seen in 2018.

Global reinsurance capital had risen 7% over the first nine months of 2019, to reach $625 billion at the end of Q3.

Traditional reinsurer equity drove this, rising 9% in the period to reach $532 billion, a new record level.

While the decline in alternative capital was largely related to collateralised reinsurance losses and claims payments, while catastrophe bonds, sidecars and industry loss warranties (ILW’s) remained relatively aligned with 2018 figures.

The chart above from Aon’s ILS focused unit Aon Securities shows that collateralized reinsurance is the only segment of the ILS market to have meaningfully dipped.

It’s going to be interesting to see the next set of figures from Aon’s Reinsurance Solutions, showing how much alternative capital was in the market at the end of 2019, as that could be a slight decline due to typhoon Hagibis.

However, once a few fresh capital raises are factored in at January 1st and in this first-quarter, there is every chance that the amount of alternative reinsurance capital in the market will have returned to growth in the end of Q1 2020 figures.

Aon expects that the loss of investor confidence in some quarters may continue “squeezing collateralized reinsurance and the proportional market,” while catastrophe bonds are likely to fare much better.

But overall, Aon says “the strategy of investing in insurance risk for its non-correlating benefits remains valid” and that confidence will return, driving further growth of the ILS asset class and alternative reinsurance capital.

“Enhancements in model clarity, improvements in transparency and refinements in contract language are ultimately expected to result in the resumption of growth in alternative capital,” the broker explained.