Global non-life insurance and reinsurance premiums were up by 3.6% during 2015 to $2.02 trillion, driven by advanced market movements as emerging market performance showed divergent trends, according to global reinsurance giant Swiss Re.

The global non-life re/insurance sector continued to improve in 2015 with gross written premiums (GDP) increasing by 3.6%, compared with the 2.4% gain reported at the end of 2014.

While this could be a sign of weakness in the global re/insurance landscape as a host of headwinds persist, it’s important to note that the contraction in nominal USD terms, is due to broad currency depreciation against the dollar.

With the exception of Oceania, which remained flat during 2015, all advanced market regions registered higher premium growth than emerging ones, and as such Swiss Re notes that these areas were the main driver of non-life insurance and reinsurance premium growth in 2015.

At 4.1% advanced Asia recorded the highest growth out of the advanced markets, with North America also registering solid non-life premium growth of 3.2%. After several years of limited growth Western Europe non-life re/insurance premiums returned to a moderate growth trend, of 1.5%.

For emerging markets premium growth was more divergent across the landscape. Overall, non-life re/insurance premium growth slowed to 7.8% in 2015 from 8.6% a year earlier, with contractions in some regions offsetting increases in others.

Swiss Re reveals that China was a key driver of premium growth in 2015 for emerging markets, increasing non-life re/insurance premiums by an impressive 17%. Excluding China, emerging Asia reported growth of 5.9%, while the Middle East and Central Asia continued its strong growth path with an increase of 9% in the year. 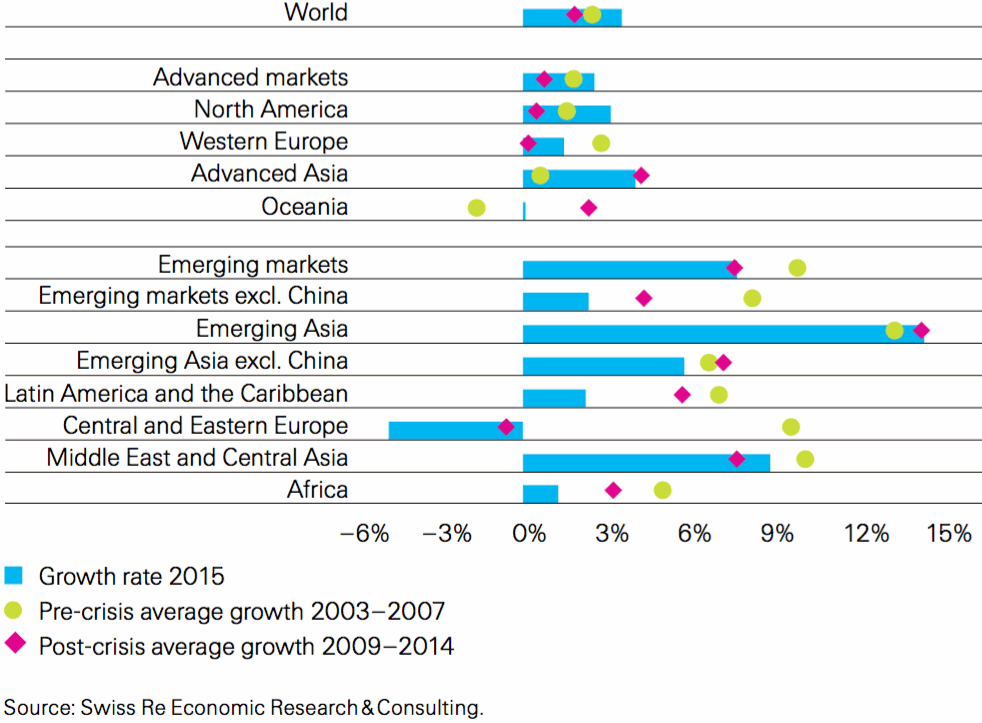 Non-life premiums growth in the advanced and emerging markets in 2015, pre- and post-financial crisis averages

However, slower growth in Africa and Latin America, at 1.3% and 2.3% respectively, combined with a decline in premiums in Central and Eastern Europe of 4.9%, which Swiss Re attributes to steep contractions in Russia and Ukraine, meant that emerging markets non-life re/insurance premium growth, overall, slowed in 2015 when compared with the previous year.

Swiss Re’s latest SIGMA report shows that in real terms, total insurance premium growth in 2015, so life and non-life, increased by 3.8% in 2015, compared with 3.5% the previous year, totalling $4.55 trillion. However, in nominal terms this is 4.2% less than seen in 2014, again due to widespread and significant currency depreciation against the U.S. dollar.

Insurance penetration across the globe continues to rise, which in turn should result in greater demand for reinsurance protection, which, could mean greater involvement of insurance-linked securities (ILS) in both advanced and emerging markets.

Swiss Re expects non-life premium growth to slow in the coming months as economic challenges and the softening landscape persist, particularly in emerging markets where this perhaps less growth potential in the current climate.

For emerging markets Swiss Re feels the future will be mixed, with strong growth in parts of Asia owing to regulatory advances likely to be offset somewhat by continued contraction of premiums underwritten in places like Russia, than remain in a recession.