A $200bn catastrophe loss year (that took 18 months to accumulate)

Everyone thought it would take a really significant single loss, or an aggregation of numerous catastrophes that drove significant impacts in a single year, to change the trajectory of pricing. 2017 wasn’t big enough to do it alone. But now that the market has suffered $200 billion of losses, there are rising hopes for positive price movements in 2019.

Our recent global reinsurance market survey found that 40% of our hundreds of respondents believe that the market needed to experience a $200 billion or greater catastrophe loss, or series of loss events aggregating to that amount at least, before any serious change in pricing trajectory would be seen.

The survey, which only included verifiable responses from participants across the insurance, reinsurance and insurance-linked securities (ILS) value chain, revealed what market players thought it might take to meaningfully turn reinsurance pricing.

By meaningfully we don’t mean a return to the cycles of the past, with 40% to 80% price swings after losses.

The reinsurance market cycle is without a doubt flatter and unlikely to ever respond to that degree again, thanks to the capital elasticity that the sector now benefits from.

But a turn in trajectory would still be expected, especially after a sustained period of losses that drains or restricts capital from the sector and particularly if it’s thought the rates underwritten at prior to the losses were set too low.

After the costliest year on record for the global insurance and reinsurance industry in 2017 (approximately $144bn of losses) didn’t result in a significant pricing response, thoughts once again turned to what could create that urgency to uplift rates.

2018 natural catastrophe losses are already estimated to have surpassed $70 billion, perhaps as much as $80 billion if the wildfires and hurricane Michael reach the top-end of estimates, making this a more than average year of losses already for the industry.

But if you look specifically at the period from around hurricane Harvey in August 2017 to now, the industry is getting very close to suffering the $200 billion loss year, only it’s taken roughly 18 months to accumulate that tally.

There were around $140 billion of insurance industry losses from major catastrophes between August 2017 and May 2018 as well, so when you also factor in hurricanes Florence and Michael, the Japanese typhoons Jebi, Trami and others, plus the California wildfires, it’s definitely getting close to $200 billion in 18 months.

Given the way sentiment in the market is moving as we approach the January reinsurance renewal season, with the expectation (hope) that there will be rate increases, at least across catastrophe affected regions and loss affected accounts if not more broadly, perhaps it was hitting a certain amount of losses in a sustained period, not the strict term it takes to aggregate them that mattered.

As we’ve documented in our recent series of articles on market conditions as the renewal approaches, there is an expectation of a capacity crunch in retrocession markets, leading to price increases there and the potential for known-on effects across reinsurance rates.

In addition the efforts to improve performance at Lloyd’s have driven a requirement for more reinsurance and a greater awareness of the lack of performance some lines of business have shown, which is raising rate expectations across some specialty lines as well.

Add in the aggregation of losses across the ILS fund sector, the resulting trapped collateral, the rising loss toll for catastrophe bond holders from 2017 and 2018 events, plus the recency and uncertainty associated with the California wildfire losses and ongoing loss creep from hurricane Irma, potential creep from Michael and other catastrophes, plus the additional challenge of late renewal submissions, it’s easy to see why the market appears a little dislocated right now.

Hence it’s no surprise that the $200 billion loss year, that took 18 months to manifest, has been enough to drive a seemingly more meaningful ambition to turn the direction of the market.

It seems that the pressure on capacity that this sustained period of losses has caused, given almost all the major events experienced hit the ILS market and also retro, trapping collateral repeatedly, may be the stimulus required to pressure a more sustained uplift in prices.

Our survey found that more than 40% of our verified respondents expected it would take at least $200 billion of losses to turn the market. Over half of those actually thought it would take over $250 billion, which suggests the price responses seen at 1/1 may not be as significant as some would hope. 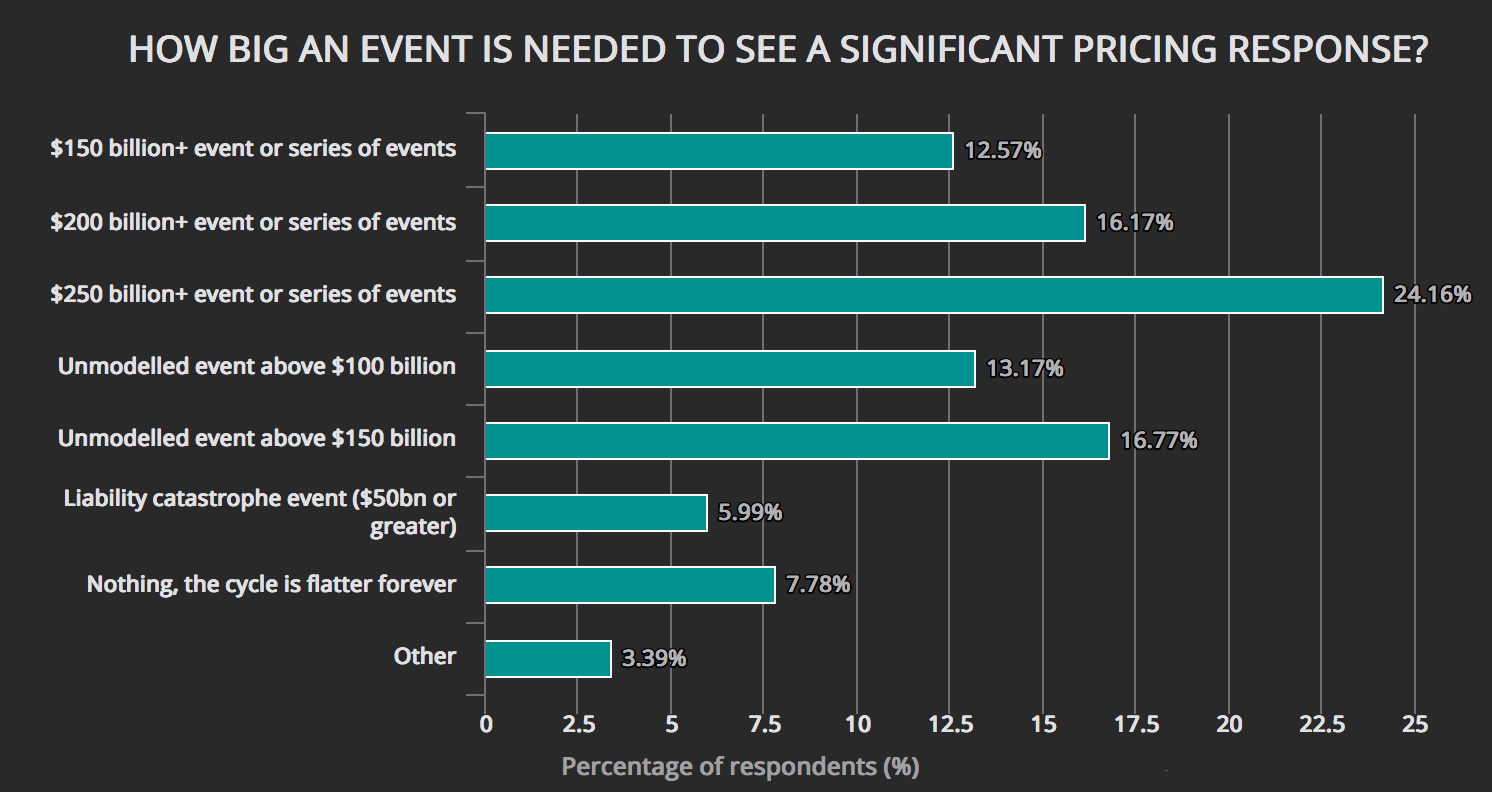 Our sources in the ILS fund market suggest they are seeing rate increases on many renewals, although the major reinsurers continue to soak up large European catastrophe programs at rock bottom pricing, we understand.

However, our sources tell us not to expect significant rate movements, with “up to 5%” a regularly repeated phrase in recent days.

It’s clear there will be pockets where rates respond better, such as some retrocession renewals and certain specialty lines, but these aren’t as widespread as the flat to 5% segments of the market, we’re told.

Most ILS fund sources say they expect the larger rate response to be at the mid-year renewals, when U.S. property catastrophe risks and Florida dominate the discussions.

But some sources say they have been pleasantly surprised by the way rate is developing across the January negotiations and that they are already feeling more positive about their 2019 portfolios as a result.

The capital markets may hold the key to the duration of these rate increases though, as with a number of really significant investor activities ongoing on the sidelines that could bring new sums of capital into the industry in 2019, whether rates remain at whatever level they end the renewals at, or a decline returns, remains to be seen.

The survey was conducted prior to the recent California wildfire outbreak.

Hundreds of responses from identifiable participants were received, including numerous from reinsurance market CEO’s and other senior decision makers. In total over 62% of the respondents provide input to or are responsible for reinsurance buying decisions.

The full results of the survey are freely available online and we’re happy to discuss them with any industry participants. We’re interested to hear your thoughts. 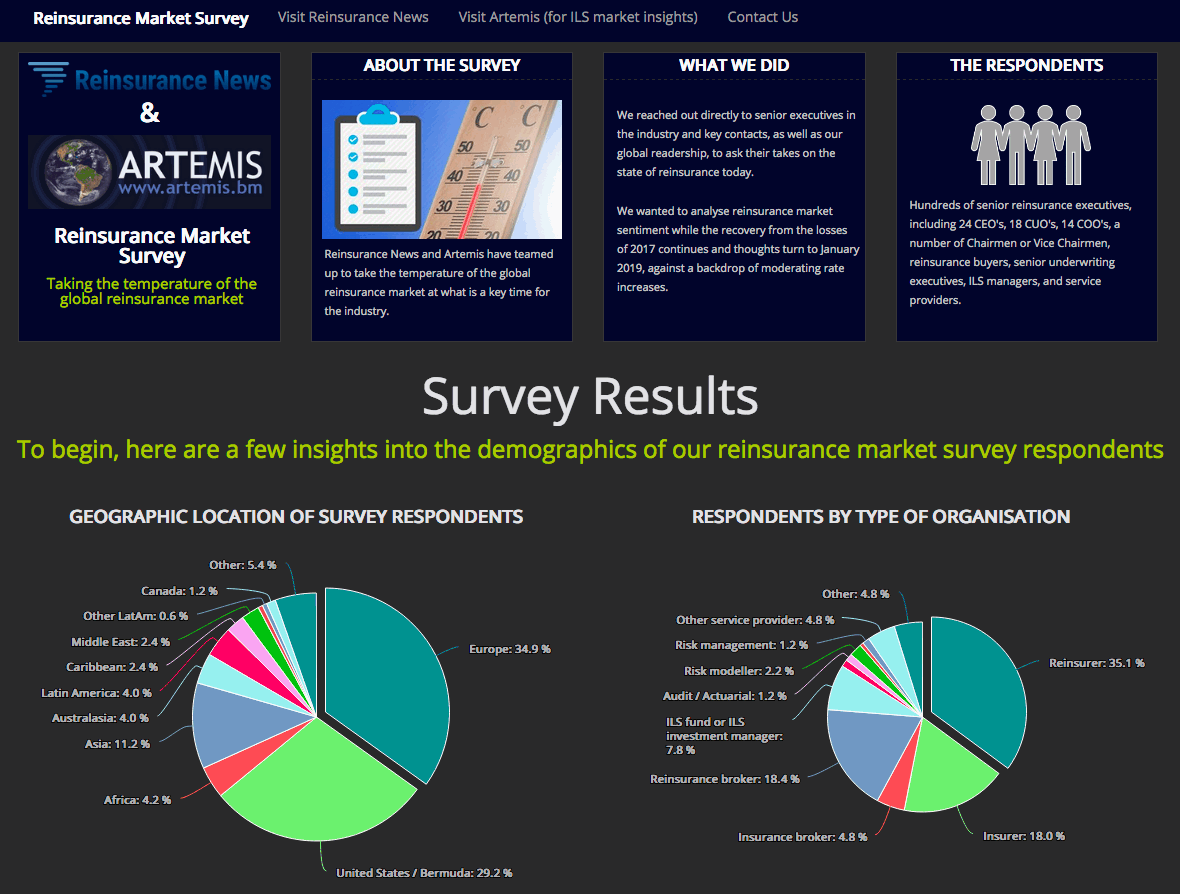