Ecuador has been hit by a powerful magnitude 7.8 earthquake on Saturday, causing widespread severe damage to buildings and infrastructure, claiming at least 77 lives and causing hundreds of injuries.

The earthquake struck Ecuador at 18:58 local time on Saturday (23:58 GMT) near the town of Muisne in the north. The quake occurred at a depth of 19.2km, but shaking was widely felt across the country and damage is said to be extensive. 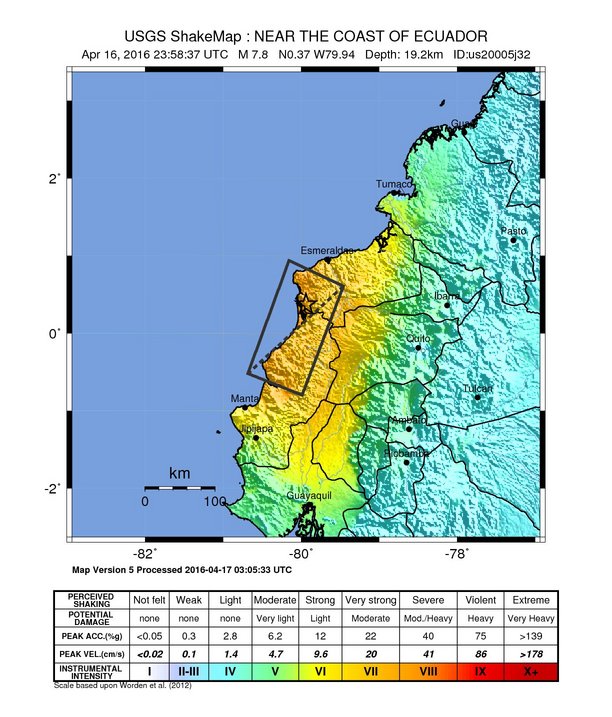 Ecuador earthquake shakemap - from the USGS

The M7.8 Ecuador earthquake was felt widely in the capital of Quito and has caused severe damage to the commercial are of Guayaquil, where buildings have collapsed and structures badly damaged. A bridge is reported to have been destroyed 300km away from the epicenter.

At least 77 people are reported to have died and 588 injured, numbers which are expected to increase as less accessible areas are reached.

The town of Pedernale near the epicenter is reported to have suffered many building collapses and significant damage, with the mayor saying the entire town had “collapsed”. Severe damage to buildings has also been reported in the city of Manta.

For the insurance, reinsurance and insurance-linked securities (ILS) markets, this Ecuador earthquake comes just a day after Japan suffered a second and much more damaging earthquake in the Kumamoto region, raising the prospects of further losses.

Some impact to reinsurance contracts seems likely, given the extent of the damage in Ecuador. With ILS funds increasingly participating in collateralised reinsurance and private ILS contracts it does seem possible that there could be a small impact to certain ILS funds as well as reinsurance sidecars.

The earthquake in Chile in 2015 resulted in a number of ILS funds having to set aside small reserves for potential losses, impacting net asset values. A similar situation may be possible with this Ecuador earthquake, although any impact to ILS or reinsurance sidecars would be expected to be minimal, given the dominance of traditional reinsurance markets in Ecuador.

The USGS preliminarily estimated a 48% chance of an economic financial impact of over $100m, with a 32% chance of it being up to $1 billion. Reports coming out of Ecuador would suggest that the economic loss is likely to be above the $100m lower end and could be further up that range.

An update from Aon Benfield’s risk modelling and analytics unit Impact Forecasting is below:

Overview
A major magnitude-7.8 earthquake struck Ecuador’s central coast on Saturday evening, killing at least 41 people and causing widespread damage. The tremor occurred at 6:58 PM local time (23:58 UTC April 16) with an epicenter located 27.0 kilometers (16.8 miles) south-southeast of Muisne, Ecuador. The United States Geological Survey (USGS) noted that the shallow earthquake was registered at a depth of 19.2 kilometers (11.9 miles). Local officials noted that the earthquake shook for about 40 seconds. Cities across Ecuador (including Quito) and in neighboring countries of Colombia and Peru felt shaking from the main tremor. Dozens of aftershocks were recorded, including at least four with magnitudes greater than M4.0.

Given the temblor’s epicenter located near the Pacific Ocean coastline, the Pacific Tsunami Warning Center (PTWC) indicated possible tsunami waves. No major waves were reported, and the Ecuador government did not officially issue a tsunami alert.

Event Details
As of this writing at 03:00 UTC April 17, the Ecuador government declared a state of emergency for six of the country’s 24 provinces as initial reports confirmed that widespread and extensive damage had occurred in numerous cities. The preliminary death toll was listed at 41, including 16 in the city of Portoviejo, 10 in Manta and two in Guayaquil. The toll was expected to rise as assessments continue.

Early reports from various news agencies indicated that tremendous damage to homes and businesses was widespread in the towns of Guayaquil, San Antonio, Cadeate, Loja, Ambato, Santo Domingo, Libertador Bolivar, and El Oro. Several neighborhoods in Quito reportedly incurred varying levels of damage as well. Pictures showed flattened homes and debris strewn about roadways as residents raced to find people trapped in rubble. There were also reports of partial or complete roof collapses in large shopping centers, hospitals, hotels, and other facilities. There was no update near the epicenter from the town of Muisne – a sparsely populated area that is known as a major fishing port.

Infrastructure was substantially impacted roads buckled, split or crumbled, and one major overpass in Guayaquil collapsed. Guayaquil’s international airport was closed due to a lack of available communications, and Manta’s airport was closed after the control tower was seriously damaged. Electricity outages were extensive, with entire cities currently reporting no power or water access. Hydroelectric dams and oil pipelines were also shut down for precautionary measures.

The USGS notes that while some structures were built to be resistant to earthquake shaking, most structures in this part of Ecuador are not and are particularly vulnerable to large seismic events. The predominant vulnerable building types are unreinforced masonry and mud wall construction.

Seismological Recap
Ecuador is a highly seismic region of the world, and is located on the Pacific Ocean’s active “Ring of Fire”. The event had a large footprint, as seen in the latest USGS ShakeMap below. The USGS provided this official seismological recap of the event:

The April 16, 2016 M7.8 earthquake, offshore of the west coast of northern Ecuador, occurred as the result of shallow thrust faulting on or near the plate boundary between the Nazca and Pacific plates. At the location of the earthquake, the Nazca plate subducts eastward beneath the South America plate at a velocity of 61 mm/yr. The location and mechanism of the earthquake are consistent with slip on the primary plate boundary interface, or megathrust, between these two major plates. Subduction along the Ecuador Trench to the west of Ecuador, and the Peru-Chile Trench further south, has led to uplift of the Andes mountain range and has produced some of the largest earthquakes in the world, including the largest earthquake on record, the 1960 M9.5 earthquake in southern Chile.

While commonly plotted as points on maps, earthquakes of this size are more appropriately described as slip over a larger fault area. Events of the size of the April 16, 2016 earthquake are typically about 160×60 kilometers in size (length x width).

More than 15 million residents were estimated to have felt levels of shaking ranging from “Weak” to “Severe” on the Modified Mercalli Intensity (MMI) scale. Among the cities feeling the most intense shaking at MMI Level VIII included Muisne, Tosugua, and Pedernales.

For background, the USGS uses a computer simulation model that is designed to rapidly and automatically take into account the differences in proximity to populated areas, the depth of the earthquake, and building standards to provide initial analysis to governments and emergency management officials.

The latest update from AIR Worldwide:

BOSTON, April 17, 2016 – According to catastrophe modeling firm AIR Worldwide, a major earthquake has struck the central coast of Ecuador. The USGS has estimated moment magnitude at 7.8 and focal depth at a relatively shallow 19 km (11.8 miles). Widespread damage is reported. A breakdown of public order has been reported in the city of Portoviejo, prompting mobilization of 10,000 troops.

According to AIR, the epicenter was located on a relatively sparsely populated part of the Ecuadoran coast near the northern town of Muisne. Damage, however, has been reported at considerable distance from the epicenter. Roads have been made impassible by large cracks, and power and communications are out in the affected area. It will take some time before the extent and degree of damage from the current event are fully known.

According to AIR, seismic hazard in Ecuador is driven primarily by the Nazca subduction zone, which is located just offshore of western South America. Several earthquakes of magnitude 7.0 or greater have affected Ecuador since 1900, including a M7.1 earthquake that caused considerable damage in Manabi province in 1998. In Bahia de Caraquez, a coastal city, that earthquake damaged many engineered mid-rise and high-rise buildings. Fully 71% of the city’s reinforced concrete buildings suffered some degree of damage, and 17% of these buildings collapsed or were damaged beyond repair. In the town of Canoa, 60% of structures were damaged.

According to the USGS, yesterday’s megathrust earthquake occurred as the result of shallow thrust faulting on or near the plate boundary between the Nazca and Pacific plates. Here the Nazca plate is subducting eastward beneath the South America plate at a velocity of 61 mm/yr.

Confined masonry construction has become widespread in recent years. The majority of building permits issued today are for buildings comprising reinforced concrete (RC) columns and beams, with concrete blocks used for infill. Others use traditional brick for infill. Typically, these construction types use RC slabs for the roof, making them heavy and prone to earthquake damage.

While confined and reinforced masonry are very common in typical low rise residential properties, reinforced concrete, in particular with shear walls, is the dominant construction type used for mid- and high-rise residential buildings in urban areas.

While commercial and industrial buildings are generally constructed according to stricter standards than residential structures, building code enforcement varies within and across Ecuador. Further, it is important to note that the seismic performance of buildings in Ecuador is greatly influenced by local construction practices. Building damageability is often exacerbated by poor workmanship, inadequate materials, and a lack of building code enforcement.