Summer flooding from extreme rainfall and storms that affected the Yangtze River basis and north-northeastern China resulted in economic losses of over $38 billion, but just 1.5% or $596 million was covered by insurance, according to reinsurance broker Aon Benfield.

Highlighting the protection gap in China, which is also a factor more broadly in Asia, even though over 130,000 claims were filed the insurance and reinsurance industry loss from the flooding only just crept above half a billion dollars.

At just above an average of $4,500 per claim it’s clear that sums insured in China are also low, particularly in more rural areas, but it is the low penetration of insurance coverage that presents the opportunity to both Chinese and global insurance and reinsurance firms.

The protection gap remains particularly evident in Asia and China, despite the rapid build up of infrastructure, residential, commercial and industrial properties in the region, insurance penetration has not yet kept pace.

Growing insurance and reinsurance markets in the region should see penetration increase gradually, particularly in China where there has been a significant wave of capital from within the country interested in establishing reinsurers locally, as investors seek new sources of more permanent capital and diversification outside of Chinese investments.

Additionally the global reinsurance players are all active in China and will gradually increase their footprints there, helping local insurance markets to flourish, with support from global risk capital. Larger ILS players are also keen to deploy capacity to support Asian insurance markets, with some already participating in retrocession and reinsurance transactions in the region, including China.

But the recent flooding in China is a reminder that there is a lot of work to do, if insurance penetration is to be increased.

China suffered particularly bad flooding and typhoon impacts in Summer 2016, perhaps the worst since 1998, according to Aon Benfield’s China Analytics team. With much of the country experiencing substantial seasonal “Mei-Yu” rainfall from April onwards, the result was severe flooding which affected nearly 20 provincial regions.

Aon Benfield has published a report on the two major floods in China during summer 2016, with a detailed comparison to a 1998 flooding event, including rainfall statistics, impacted areas, and loss estimation. The report also covers Super Typhoon Meranti, and other events in Summer 2016. Download the report here.

“The latter is estimated to be approximately 1.5% of total economic loss, reflecting a low level of insurance penetration.”

However, encouragingly when the 2016 Chinese summer flooding is compared to the 1-in-100 year flood event of 1998, which was even worse than this years, it looks like resilience in the country is increasing.

“Despite similar hazard patterns, the impact has decreased significantly since 1998. For example 68% less crops were damaged 18 years later in this summer’s event while the Yangtze River experienced 20% higher-than-average precipitation in both events but the dam did not break in 2016,” Aon Benfield explained. 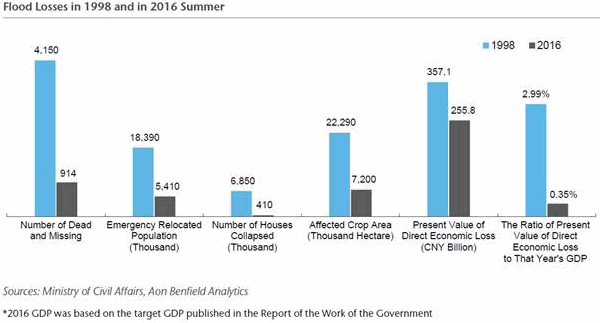 “The Chinese government has increased investment and capabilities in flood forecast and control, boosting defence systems since 1998 and acting as a major driver of the reduced flood losses in recent years,” the broker continued.

In total Aon Benfield reports that direct economic losses from all catastrophes so far in 2016 in China are around CNY 330 billion, which converts to just under US$50 billion. That shows the need for risk transfer, insurance and reinsurance and also the opportunity for providers of risk capital (traditional and alternative) as penetration of coverage increases.

Yifan Fu, Head of Aon Benfield Analytics Greater China, commented on the flood losses; “As Chinese re/insurers begin to analyse their losses from the floods, the report provides a market overview to help prepare for the renewal season.

“While it is still early days to predict the full impact of the summer events, it is clear that the low insurance penetration will provide a potential for growth going forward.”

77% of total catastrophe and weather economic losses in China in 2016 are derived from flood and ecological disasters, according to Aon Benfield, while drought and typhoon make up the bulk of the remainder.

Insurance and risk transfer can assist the Chinese government in better protecting its people and reduce the burden on the state to cover the bulk of these losses, while also enabling the population to protect itself and improve their resilience and ability to bounce back after disaster strikes.

Insurance benefits could also help to promote resilient infrastructure development as well, which would ultimately benefit all parties.

At just 1.5% insured, but causing $38 billion of loss in a year, Chinese flood risk is clearly a peak peril which needs reinsurance and ILS capital to be deployed to protect insurers offering policies at property level. Penetration will increase, but the rate of increase will depend on cultural factors, the government and regulators willingness to welcome global players and the ability of the industry to adequately model risks.