Reinsurance giant Swiss Re has estimated that global insured losses from natural and man-made disasters will hit $136 billion, the third highest figure on record but still trailing well below an expected $306 billion of economic impact.

Economic losses are significantly higher than seen in 2016 ($188bn) and losses that will be paid for by insurance and reinsurance interests have more than doubled from 2016’s $65 billion.

The total insured loss tally of $136 billion is well above the annual average of the last ten years, which sat at $58 billion.

From these figures it is easy to see why many in the insurance and reinsurance sector are calling for rate increases at the upcoming January renewal season.

The hurricanes that impacted the United States are the major drivers of loss, both economically and on an insurance basis, with 2017’s hurricane season cited as the second most costly after 2005.

Natural catastrophes accounted for the majority, or $131 billion of this year’s insured losses, while man-made disasters only contributed $5 billion to the total.

“In recent years, annual insurance losses from disaster events have exceeded USD 100 billion a few times,” commented Martin Bertogg, Head of Catastrophe Perils at Swiss Re. “The insurance industry has demonstrated that it can cope very well with such high losses. However, significant protection gaps remain and if the industry is able to extend its reach, many more people and businesses can become better equipped to withstand the fallout from disaster events.”

Swiss Re estimates that the insurance and reinsurance industry will pay around $93 billion of losses for the combined impacts of hurricanes Harvey, Irma and Maria, with economic losses expected to be much higher once the full cost is understood.

“There has been a lull in hurricane activity in the US for several years,” said Kurt Karl, Swiss Re’s Group Chief Economist. “Irrespective, there has been a significant rise in the number of residents and new homes in coastal communities since Katrina, Rita and Wilma in 2005, so when a hurricane strikes, the loss potential in some places is now much higher than it was previously.” 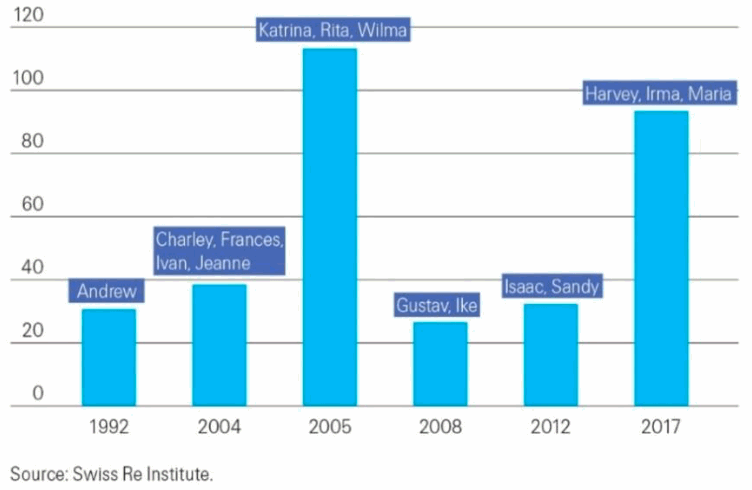 The toll from wildfires in California is still being counted, while severe thunderstorms earlier in the year have again added more to the total, with five separate severe thunderstorm events between February and June causing insured losses of more than $1 billion each.

Will the high level of losses in 2017 be sufficient to increase reinsurance pricing, or will the effects be localised to begin and then tail off under the weight of capital?

← Older article Nephila backs Volante, as it aims to be a global MGA for alt capital