The insured losses from severe weather in the United States continue to rise, with thunderstorms, tornadoes and hail in May expected to cause an insurance industry loss of over $1 billion, the second month in a row that insured losses have reached that level.

The latest monthly report from Impact Forecasting, the catastrophe modelling unit of reinsurance broker Aon Benfield, identifies a number of periods of severe thunderstorm weather which between them are likely to result in billions of dollars of economic losses while the insured loss total is expected to be $1 billion+.

May’s severe weather follows another heavy month of losses in April, which also saw over $1 billion of insured loss according to Impact Forecasting in its report a month earlier.

Impact Forecasting’s May catastrophe report identifies four periods of severe weather that hit the U.S. during the month, resulting in aggregate insured losses which it estimates will reach more than $1 billion, with economic losses expected to reach several billion dollars.

Steve Bowen, associate director and meteorologist within Aon Benfield’s Impact Forecasting team, commented; “While tornado activity in the United States was fairly subdued during the month of May, there was no shortage of vigorous thunderstorm formation across the country. Large hail and damaging winds left considerable damage in many areas, which served as another reminder of how costly non-tornadic storm events can be for the insurance industry and local governments.”

Impact Forecasting explains in the report:

The costliest stretch occurred during a five-day period which saw damage incurred in parts of the Midwest, Plains, Rockies, Mid-Atlantic and the Northeast, including the major metropolitan areas of Chicago, IL and Denver, CO. Up to baseball-sized hail and straight-line winds gusting in excess of 70 mph (110 kph) were recorded that severely impacted residential, commercial, and automobile interests. Total economic losses were expected to potentially cross the billion-dollar threshold, with insured losses well into the hundreds of millions (USD). The Rocky Mountain Insurance Information Association cited nearly USD110 million in insured losses alone in Colorado.

It’s worth noting that while these severe thunderstorm and convective weather related losses are now reaching well into the billions of dollars, U.S. tornado season activity remains well below average. Through the end of May, tornado activity across the U.S. remained in the bottom 25th percentile of all years dating to the early 1950s.

The chart below from the U.S. Storm Prediction Center shows U.S. inflation adjusted tornado activity and percentile ranks, clearly showing just how far below average this year has been. 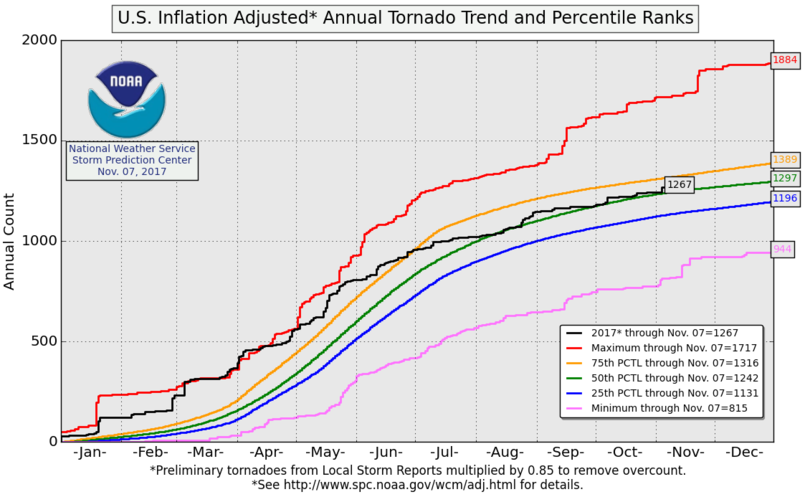 The May catastrophe recap report from Impact Forecasting also includes details of the flooding in Eastern Europe, earthquakes in Thailand, earthquake near Greece and Turkey as well as severe weather, flooding and earthquakes in Asia.

Globally, insurers are already facing over $7 billion of catastrophe and severe weather losses from the first-quarter of 2014. With April and May together now adding well in excess of $2 billion to that total in the U.S. alone, the loss experience of primary insurers in 2014 is rising steadily.

However, it must be noted that the insured loss amounts experienced from catastrophe events around the globe this year are not yet at the levels that they will particularly worry the well-capitalised insurance and reinsurance industry.

Steve Bowen explained; “Despite the relatively low activity of the 2014 tornado season, insurers are still faced with several billions of dollars in storm-related damage claims. However, the industry remains well-positioned financially as the focus in the U.S. begins to shift towards the start of the Atlantic hurricane season.”

The full report from Impact Forecasting can be downloaded in PDF format here.