On the 12th of May 1999, Artemis was launched in front of an audience of reinsurance and investment executives in Bermuda. The goal, to provide an online home for the emerging catastrophe bond, ILS and the capital market’s participation in reinsurance.

16 years on Artemis continues to grow and evolve alongside the ILS, cat bond and third-party reinsurance capital market. What was once an opaque marketplace, considered a niche area of reinsurance, is increasingly driving global market trends and becoming more mainstream every day.

Artemis continues to facilitate a conversation about alternative methods of risk transfer, leveraging capital market techniques and risk financing. However the topic is now passing even one of convergence, becoming more focused on how capital drives innovation, disruption, and is a game-changer which is increasingly the ‘new normal‘ for the reinsurance market paradigm.

Our goal hasn’t changed. We aim to provide a platform for the ILS market, facilitating education, information provision and transparency, as well as hopefully being useful to participants in what has historically been a relatively closed market.

Today the veils have been lifted and interest in ILS and accessing the returns of catastrophe risk and reinsurance has grown rapidly. That has helped Artemis grow to reach a monthly audience of around 35,000 readers, with more than 6,000 receiving emails from us on a weekly basis.

For those who would like to receive email alerts whenever a new article is published, you can now do that as well by filling out the form on this page.

As usual on Artemis’ birthday we like to look at how Artemis has grown alongside the market.

16 years on the Deal Directory now features information on 376 individual catastrophe bond or ILS transactions and the total cumulative completed issuance recorded has reached a massive $68.9 billion. If we include the risk capital from cat bond transactions that are listed but still being marketed and yet to complete, that number jumps up to $70.017 billion!

When Artemis launched in 1999 we were pleased with 200 or so readers a month, given the niche focus. Now we try to average 35,000 per month, demonstrating the massively increased interest in catastrophe bonds, ILS and reinsurance as an asset class, as well as the change it has generated across the reinsurance market.

Some other figures for you. Artemis has published over 5,350 articles since the news blog was added in mid-2008. In the last 12 months alone, visitors to Artemis made over 1.5 million page-views of the website between them.

ILS and reinsurance continues to evolve and catastrophe bonds, capital markets backed capacity, the use of derivatives, swaps and other novel risk transfer tools continues to grow in importance and prevalence within the market.

Increasingly there is a blurring of the lines between the alternative and traditional sides of the market, but Artemis maintains a focus on the capital markets, ILS, cat bonds, weather and catastrophe risk transfer, as well as the trends that this new competition from third-party reinsurance capital is creating.

Artemis remains the largest audience, on any medium, focused specifically on these topics. It is also among the largest re/insurance focused audiences anywhere. As a result it’s a great place to get your product or investment offerings known, to an organically grown and highly relevant audience. Please get in touch with us to discuss advertising and sponsorship opportunities.

Thank you to all our readers, contributors, sponsors, partners, friends and advertisers, without whom our continued coverage of this market would not be possible. We truly value the relationship we’ve built with the market, the friends we’ve made over the year’s and appreciate your support greatly.

Here are some reminders of the evolution of Artemis since its launch in 1999, for those who’ve been with us since the start. 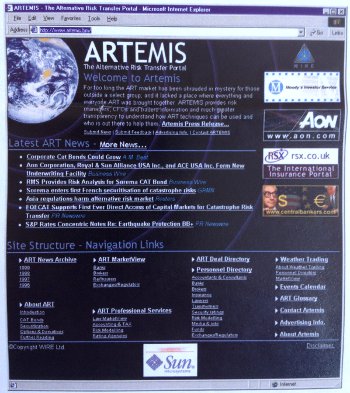 This image shows how Artemis looked on the day it launched, 12th May 1999, taken from the original press release. I particularly enjoy the fact that the top headline discussed the potential growth of corporate cat bonds, a topic that continues to be discussed today. 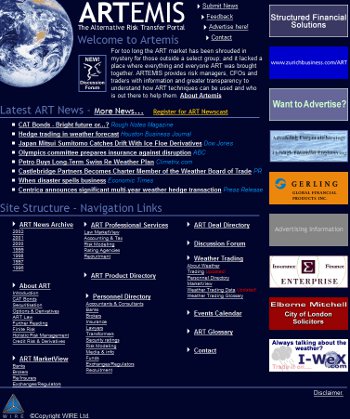 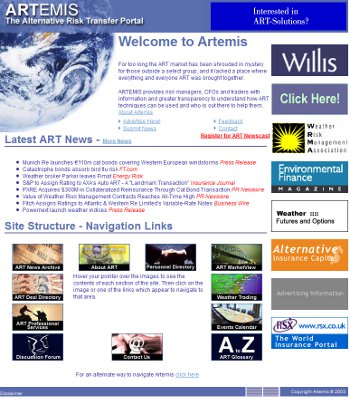