The United States saw 11 weather and climate disaster events which each caused losses exceeding $1 billion in 2012, according to data from the NOAA. That makes 2012 the second most costly year in terms of economic damages since 1980, with a total of more than $110 billion of damages over the course of the year.

The $110 billion of economic losses suffered in the U.S. in 2012 are second only to those suffered in 2005, when hurricane Katrina along with three other major hurricane landfalling events lifted the year’s total damages to $160 billion.

Events in 2012 included seven severe weather and tornado events, two tropical cyclone or hurricane events, one of the worst droughts on record and associated wildfires. The 11 billion dollar plus events in 2012 killed over 300 people.

An interesting statistic released by the NOAA is that 2012 saw 11 billion dollar plus events and 2011 saw 14, making these the two years since 1980 with the most weather and climate losses over $1 billion. That suggests that the frequency of losses of over $1 billion has increased, likely due to increased exposures through infrastructure and building as much as through increased frequency of severe weather.

For insurers this is important, as it’s often not the total size of an event that hurts the balance sheet (although of course major events do) it can be the aggregation of a number of large losses across a year which can be really damaging to an insurers finances. This increase in severe events also helps to explain the increased interest in securing frequency protection from reinsurers in recent years.

Weather and climate losses for the U.S. in 2012 were driven by hurricane Sandy, which the NOAA puts the cost for at around $65 billion, and the drought which it costs at around $30 billion. The drought is a particularly interesting loss as it has put a new focus on agricultural and crop insurance within the re/insurance market and a number of new firms are targeting those lines of business as a result of last years losses.

Here are the 11 billion dollar plus weather and climate events of 2012: 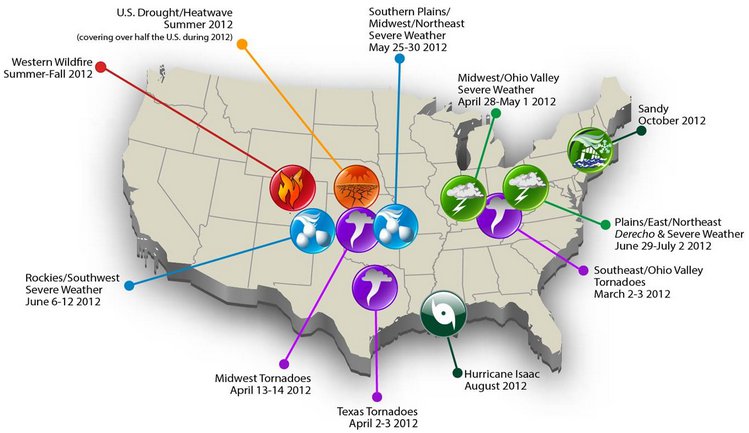 Interestingly, NOAA provides this data going back to 1980 on a CPI adjusted basis and it is Texas which is the U.S. state to have suffered the most billion dollar plus weather and climate disasters, with 54 over that period. Florida has only had 30 billion plus events in that time, which may come as a surprise given the states exposure to hurricanes. However Texas is also exposed to severe thunderstorm and tornado risks which makes it the clear leader.

The map below shows the states which have had the most billion dollar plus weather and climate disasters. The darker the colour the more events.

According to data from Swiss Re’s Sigma reports, the U.S. suffered $65 billion of insured losses from disaster events in 2012, predominantly weather and climate related. The high insurance penetration shows through in the U.S. where more than 50% of economic losses now tend to come back to the insurance and reinsurance industries.

So with $110 billion of economic losses in the U.S. from weather and climate disasters las year, 2013 has a long way to go to catch up. So far we’d imagine 2013 is running below $15 billion, as the tornado season only really began to take its toll in recent weeks. However, with a long 2013 U.S. hurricane season ahead there is plenty of time for the number to rise significantly and insurers and reinsurers, as well as catastrophe bond investors, cannot afford to be complacent as the statistics show.