Floridians cede rising losses to reinsurers, even without major storms: AM Best

Primary insurance carriers specialising in property risks in Florida are continuing to cede rising levels of losses to their reinsurance capital partners, even without there having been any major storms of late, rating agency AM Best has explained. 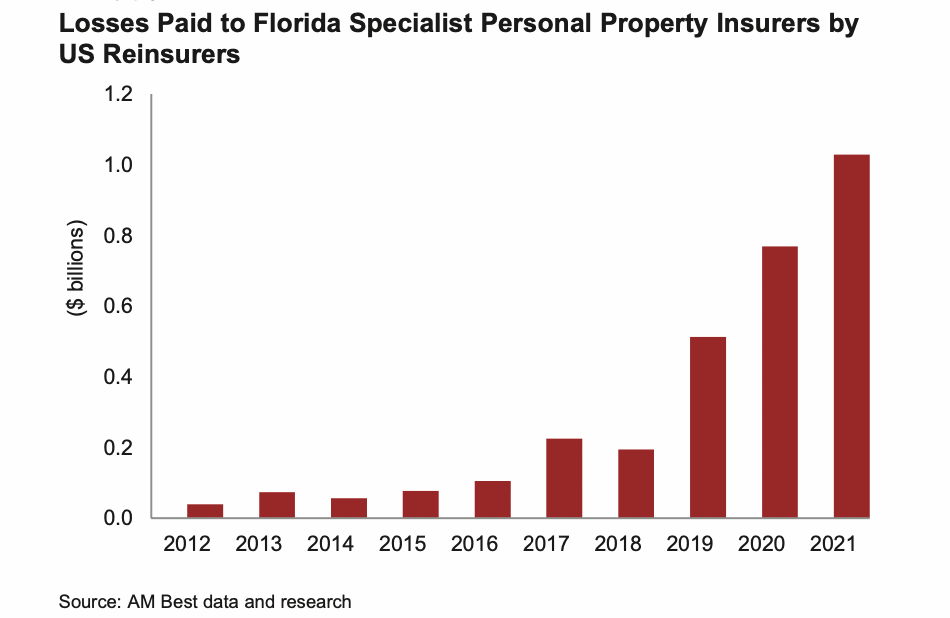 AM Best states that personal property insurance carriers in Florida, or focused on the state, show a “significantly higher dependency on reinsurance than the industry average.”

Over the last three years, the premiums that reinsurers have assumed from these Florida specialist carriers have increased by roughly 66%, but at the same time the losses have increased fourfold, even without significant hurricane activity, new analysis from the rating agency shows.

Perhaps driving home the disparity between Florida and other insurance markets, AM Best’s analysis found that reinsurance recoverables and ceded premiums among the Floridian writers were 5.7 times their policyholder surplus level in 2021.

This compares with an industry average of only 0.5 times, the rating agency noted.

A catalogue of issues has driven the huge reliance on reinsurance and the continued flow of losses to reinsurance capital, coming from the state of Florida.

Secondary peril event frequency is part of this, with insurers tapping their reinsurance for events like severe storms and hail.

Alongside this, the issues of litigation and social inflation are key factors in Florida and the losses being ceded.

Issues in the state, such as building codes, are being “exploited by parties looking to profit” AM Best believes.

Primary insurance rate hikes have been insufficient, while reinsurance costs have escalated significantly, all of which is making the state unprofitable for many carriers, and accentuating the reliance on reinsurance at the same time.

The level of reinsurance dependency in Florida is far higher than industry averages, while the losses ceded have risen in almost every year and escalated in the last three, AM Best’s data shows.

“Pricing will continue to impact business plans and companies’ ability to use reinsurance structures with adequate limits to protect against severe storms,” AM Best continued to say.

More than $7 billion in losses were ceded to reinsurance in 2021, and AM Best said that around 60% of the premium ceded by Florida specialist insurers flows to US-domiciled reinsurers, with over half the remaining ceded to Bermuda.

AM Best notes that with reinsurance losses ceded rising fast, it continues to suggest that pricing for insurance in Florida is not adequately covering the litigation and claims inflation, suggesting further rises are likely without more significant reforms in the state.

This is also driving reinsurers to pull-back from Florida, further exacerbating affordability.

Certain reinsurers have been growing fast in Florida, leaning into this environment in recent years.

Berkshire Hathaway is one, and now the largest private reinsurer assuming Florida risk from the specialist carriers.

But it’s also notable that Aeolus Re, the carrier of insurance-linked securities (ILS) specialist asset manager Aeolus Capital Management, has also seen its share of losses ceded by these Florida carriers increase, suggesting a rising importance of its capital in supporting those insurers and showing the high level of support alternative capital sources provide to the state’s insurance industry. 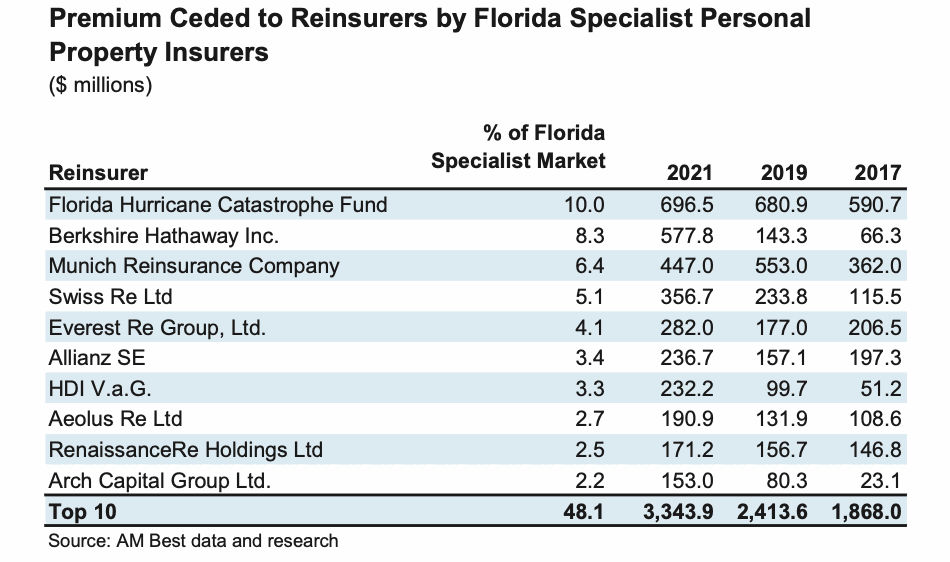 AM Best summed up that, “Reinsurers are likely to remain selective in the risks they reinsure, placing further burdens on the Florida homeowners market.”