European windstorms Eberhard and Bennet which is also known as Freya in the UK, are estimated to have caused insured property losses of around EUR 800 million in Germany, according to actuaries. 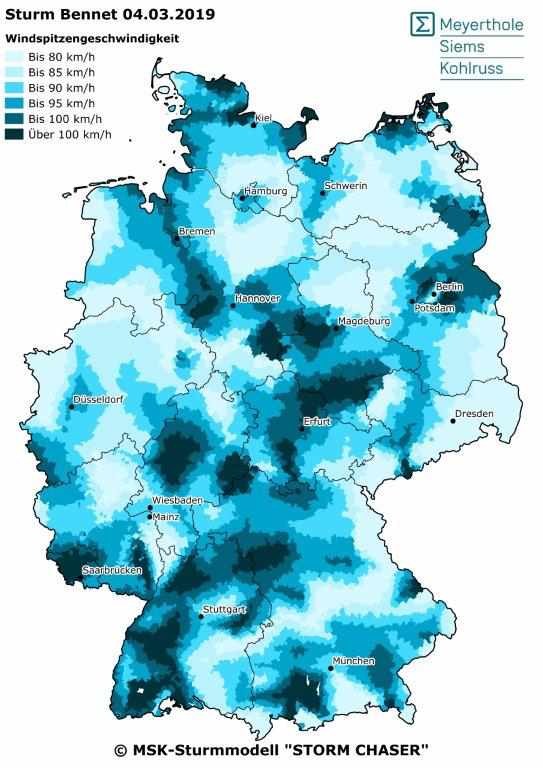 Windstorm Bennet struck the United Kingdom, France, the Benelux region, Switzerland and Germany at the beginning of March, with the effects felt in Germany largely being on the 4th of the month.

The storm is currently under investigation by PERILS AG, the catastrophe loss data aggregator, and if PERILS feels the market-wide property insurance loss from Bennet is over EUR 200 million it will report on the storm.

That seems likely now, as actuarial consultancy Meyerthole Siems Kohlruss (MSK) has said that it believes the loss to insurance and reinsurance interests in Germany alone will be around the EUR 200 million mark.

The main impacts from windstorm Bennet (or Freya) were in France, Switzerland and Germany. But some property damage was also seen in the UK as well, according to mainstream news reports of the storm.

On Germany specifically MSK actuary Onnen Siems explained, “In several showers and thunderstorms, Bennet brought gust speeds in excess of 90 km / h in almost all regions. A special feature of Bennet is that it was active over a wide area.”

However, MSK noted that significant damage typically only occurs from wind values of this level, it expects the overall impact of the storm to be manageable for insurance and reinsurance interests.

At around 200 million euros Siems said this is around the minimum level of windstorm losses German insurers expect to pay out every year.

Germany was also hit hard by storm Eberhard over the last two days, which also affected the UK, the Benelux region and also progressed into Poland as well.

For this latest storm MSK told Artemis that it estimates an insurance and reinsurance property market loss of as much as EUR 600 million, although it notes this is very early and said more information will be provided in due course.

Wind speeds in excess of 100 km/h were recorded across southern Germany as Eberhard moved into the Czech Republic. With storm Eberhard more than 25% of weather stations recorded wind gusts this high, significantly more than with storm Bennet.

Storm Eberhard has been much more severe, in terms of property damage impacts it seems.

At EUR 600 million this storm could eat into some reinsurance layers a little and of course with Germany the main region affected there will be claims for the two large German insurance and reinsurance groups, Munich Re and Hannover Re.

MSK noted that where Eberhard’s winds stood suggests that part of the claims for damage could be paid for by reinsurers.

It’s very early for insurance and reinsurance market loss estimates for storm Eberhard, but it looks set to add significantly to the winter storm toll for insurers in Europe at a time when further stormy weather is expected throughout the week ahead.