The Atlantic and Caribbean tropics are heating up and forecasters suggest that storm formation will become increasingly likely over the coming days. The race is on to see who will claim the name of tropical storm Erin, with tropical depression 5 in the far eastern Atlantic, while a depression in the Caribbean is also set to develop.

Update: As expected, tropical depression 5 was named tropical storm Erin within two hours of us writing this article. The detail below remains relevant and the tracking map for Erin is current.

Tropical storm Erin will be the fifth named storm of the 2013 Atlantic Hurricane Season, a season which so far has not had any significant impact on the insurance and reinsurance industries. However forecasters remain convinced that the 2013 season will see above average tropical storm and hurricane formation, with the average forecast suggesting 16 named storms, 8 hurricanes and 4 major hurricanes by season end.

Right now tropical depression 5 has formed in the far eastern Atlantic, to the south of the Cape Verde islands. This depression is forecast to develop into a tropical storm within the next 12 hours and so will likely be named Erin. This storm will track westward, but is then forecast to pass through cooler conditions which could cause some weakening. However there is a chance that this storm could approach the Caribbean next week and perhaps threaten the U.S. after that.

It’s not possible to suggest what strength this storm (Erin) would be by the time it has crossed the Atlantic, but it is a storm worth keeping an eye on. You can see the location and forecast path of tropical depression 5 below.

TD 5 is not the only activity in the tropics right now. There is an area of low pressure in the northwestern Caribbean Sea which is forecast to develop over the next 48 hours or so. This area of low pressure will track across the Yucatan Peninsula before emerging into the Gulf of Mexico.

The National Hurricane Centre expects this storm will develop over the next 48 hours, so it is likely that this one will not claim the name Erin, instead becoming tropical depression 6 or tropical storm Fernand, depending on its intensity. Once in the Gulf of Mexico intensification is possible over the warmer waters and this storm could become a threat to land anywhere from Mexico to as far east as New Orleans. However wind shear in the Gulf could hinder that development, so predicting its intensity is hard for forecasters right now. Again, this storm is one to watch as it develops and you can see its current position along with the forecast models below. 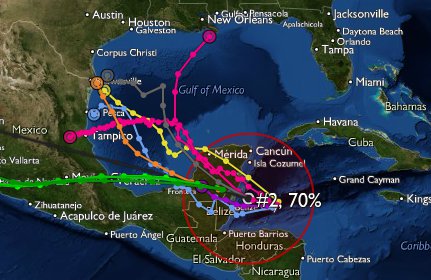 Property Claim Services (PCS), a division of Verisk and the leading source of data on insured property losses from catastrophes in...