Tremor Technologies, the insurtech with a technology-based programmatic insurance and reinsurance risk transfer marketplace, said today that it now counts 33 Lloyd’s of London syndicates among the risk capacity providers signed up to its platform.

This means that re/insurers using Tremor for their reinsurance or risk transfer placements now have efficient access to around two-thirds of capacity from the Lloyd’s market, including a significant number of the major players there.

Tremor said that the “tremendous growth” it has seen among market players “at the venerable Lloyd’s of London” has helped to further its adoption.

More importantly though, it makes Tremor’s marketplace increasingly valuable to insurance and reinsurance market participants, with now a significant amount of global traditional and alternative reinsurance capital available through it.

Tremor said earlier this month that its marketplace capital had exceeded US $500 billion, after it signed its 115th reinsurer to the platform.

With two-thirds of Lloyd’s capacity also available through Tremor, it means ceding clients can place their programs safe in the knowledge that the majority of their long-term partners are already using it, and that there is ample capacity available to place even the largest towers of risk.

Thanks to the growth of adoption at Lloyd’s, Tremor said that 67% of Lloyd’s stamp capacity is now directly available to insurance companies seeking reinsurance protection via its marketplace.

This encompasses 33 Lloyd’s Syndicates, which between them represent more than 70% of Lloyd’s Managing Agents, which have entered into agreements to offer capacity directly through Tremor’s marketplace, representing over $33 billion of capacity. 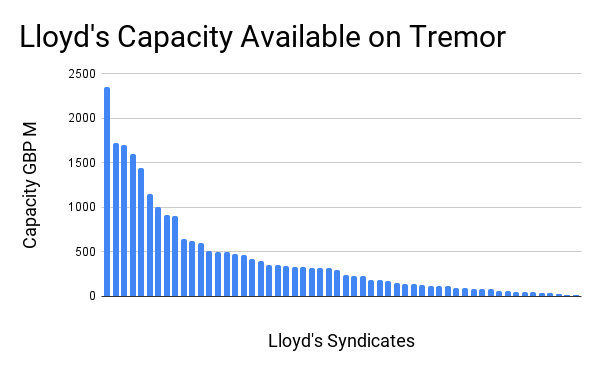 Tremor has a wide range of Lloyd’s syndicates now ready to price and write risks via its marketplace, from the largest to the smaller players.

This is important, as it means ceding clients can ensure their risks are well-diversified among market players at Lloyd’s, alongside all the rest of the global reinsurance market’s capacity.

“We believe that Tremor is a perfect complement to the Lloyd’s of London marketplace, offering its Managing Agents and their Syndicates access to more risk, more often, more dynamically. Syndicates that have wanted to compete for larger shares of placements in the past but have been held back by traditional market structure are winning larger and larger shares on Tremor. We believe Tremor offers these Syndicates wonderful growth potential as we continue to bring risk to capital more efficiently – we look forward to further contracting with more Lloyd’s participants this year,” Sean Bourgeois, Tremor’s founder and CEO commented.

Each of the Lloyd’s syndicates that are signed up to use the Tremor platform have been trained and have priced at least one placement each on Tremor to date, the company said.

Tremor represents an opportunity for syndicates at Lloyd’s to gain access to risks and reinsurance programmes they may not typically write.

Not every reinsurance tower gets syndicated into Lloyd’s, but through Tremor the syndicates can see potential new opportunities as well as the more familiar placements.

For those seeking to cede risk into the Lloyd’s market, Tremor now offers a viable and more efficient way to syndicate risk, based on the true risk appetite and preferences of the market’s there.

It feels like Lloyd’s has needed a Tremor as its market entry point for a number of years now, our regular readers will know we’ve discussed this before and said previously that if Lloyd’s wanted risk exchange technology, as it said it did, then it may not need to look any further than a company that at the time was a start-up in its Lab.

We’ve also explained a number of times that this kind of technology likely sits better and brings more benefits to everyone if it sits outside of Lloyd’s, or indeed the major brokers, so it can provide a true and holistic view of the reinsurance marketplace and its appetite for risk, rather than a view of just one part of it.

Tremor provides an independent interface between risk and capital, where transactions are only consummated if sides meet on price and terms in an efficient manner and everyone gets to express their true risk appetites.

That could be just what Lloyd’s market participants need, both to grow their books and to buy their own protection.

← Older article Zenkyoren’s new Nakama Re cat bond may be its largest ever, up to $775m