Re/insurance – an industry destroying value (or shifting it to brokers): McKinsey

The global insurance and reinsurance industry has moved from one that is “moderately value-creating” to one that “destroys value”, according to a new report from consultants at McKinsey.

It’s a damning assessment of the industry, which McKinsey believes is strongest at the company level.

As, “Half of insurers globally are not earning their cost of capital, and half are trading below book value,” the report explains.

Part of this is the unequal distribution of winners and losers in the insurance and reinsurance sector it seems, with many companies playing roles in the market chain that add little true value.

There is also likely an element of “creative destruction” at play here, as the industry has been trying to adapt to new technologies and new competitors, both on the insurtech and also alternative capital sides.

This is the convention dreamt up by economist Joseph Schumpeter, which suggests that economic development can arise out of the destruction of some prior economic order.

So, you can also think of creative destruction as innovation constantly driving change, pushing out the old guard and creating new opportunity within a sector.

We’ve certainly seen this happen across insurance and reinsurance over the last two decades and this aligns with the McKinsey analysts thinking.

“After decades of stable returns, insurance is now a value-destroying industry in which half the players do not earn their cost of equity,” McKinsey’s report claims.

Fragmentation of market share and a lack of evidence of global scale effects in the industry, plus an inability to reduce costs, struggles to raise efficiency meaningfully and evidence this in returns, have driven negative economic profits for the sector.

The fact insurance barely earns a cost-of-capital is making investors skeptical, McKinsey explains, even at a time when many re/insurance stocks have been relatively buoyant compared to broader equity markets.

McKinsey’s report displays “power curve” distribution of economic profit of every sector in the economy, with insurance and reinsurance included.

“Not only has the overall insurance industry destroyed value in the past years, but its positioning has eroded from 2005–09 to 2015–19,” McKinsey concludes from this.

But as you can see from the power curves, which we repeat below from McKinsey’s report, the one segment of the insurance and reinsurance market that has created clear value, or perhaps more accurately has gathered up more of the value being shed by re/insurers, is the broking segment. 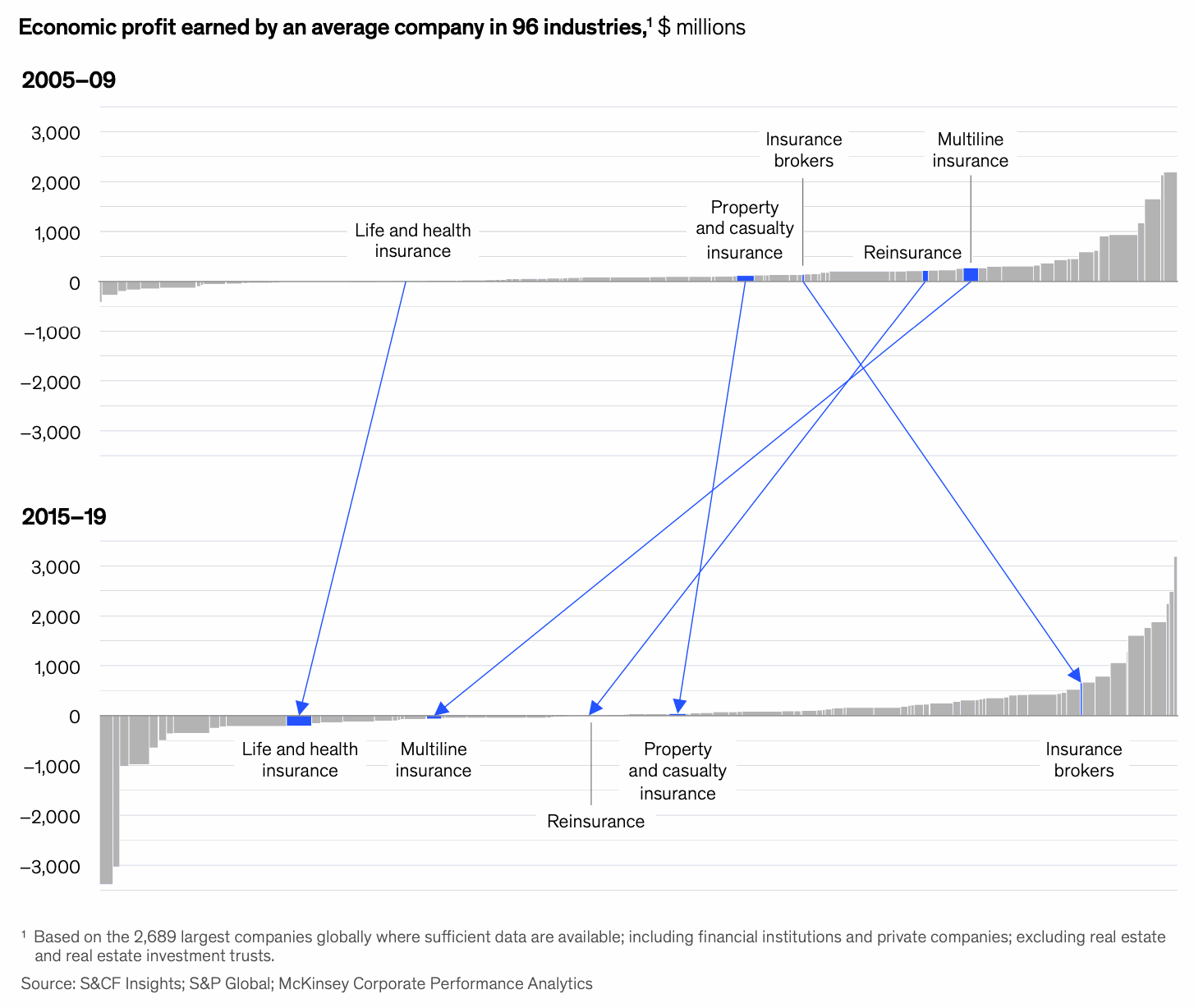 While we said above the unequal distribution, this is in terms of winners and losers, not performance so much.

McKinsey highlights that, when it comes to the destruction of value, “This is not a problem caused by a few underperformers. Rather, it is industry-wide: 54 percent of listed insurers, representing 52 percent of the global industry’s equity, had an ROE below their cost of equity over the past five years, raising questions about the long-term economic viability of their business model.”

When it comes to equality of the distribution, of winners and losers and also those generating profits, one notable shift is the rise of the broking segment.

“Over the past five to ten years, brokers have emerged as the clear winners of the industry, with both public and private investors recognizing their position of strength in the insurance value chain,” McKinsey explains.

Part of this is down to insurers and reinsurers lacking control of distribution channels, which intermediaries are firmly in charge of today.

McKinsey’s consultants point out that, because of the lack of control of distribution, re/insurers “might run an even greater risk of becoming pure balance-sheet providers, while intermediaries keep an asset-light client relationship model.”

The authors of McKinsey’s report say that, “The shift toward digital is perhaps the last chance for insurers to regain the upper hand in this “fight for the customer.””

While value may have been destroyed by the insurance and reinsurance industry, in economic terms, we believe it has also been shifted, or relinquished, by not capitalising on the one thing brokers do not directly wield, risk capital itself.

Rather than breaking down the market value chains, as disruption should likely have delivered, with risk capital the key to the ultimate delivery of a risk transfer product, control of the chains has consolidated towards the brokers, it feels.

In recent years this has resulted in steadily rising returns for brokers, while many re/insurers have seen their returns dwindle.

The data advantage, alongside brokers becoming marshals of risk capital, both of which we discussed in this recent article, may be key reasons for the shift in value from the underwriting to broking community in recent years.

Back in 2018 we questioned the ability of market players to survive if they could not clearly demonstrate and monetise the value they bring to the risk-to-capital chain.

Perhaps brokers have been much better at that in the last few years, while re/insurers have not capitalised on opportunities to press for their own importance as a link in the chain to be elevated, in fear of not wanting to go all-in on competing with the major broking houses.

Which has left many re/insurers in a position where, lacking in scale, reach, diversification, efficiency and technical or data advantage, they now don’t have the stature to regain lost ground and could be in a position where M&A might be their only way to avoid a slow death spiral towards irrelevance.

If risk capital is all you bring, then unless it’s the most efficient and lowest-cost, your position in the chain has lost significant value now.

Especially when brokers, who currently garner the highest economic value, are also increasingly marshals of capital for the industry.

Alongside brokers, the other winners in terms of value creation right now, appear to be those sitting in a mixed underwriting and distribution position, such as MGA’s.

Unencumbered by large balance-sheets and all the additional regulatory requirements surrounding that, the business model of the MGA has prospered in recent years, but now relies heavily on access to capital and capacity, as well as its distribution.

McKinsey’s report describes the “value shift toward intermediaries” in the insurance and reinsurance industry.

It feels a lot like carriers have let this shift happen and accelerate in recent years, by not doubling down on opportunities to democratise key pieces of the chain connecting risk and capital.

Ownership of certain pieces of the chain continue to sit in the hands of the intermediaries, in some cases where there may be a more optimal and efficient alternative available and their ownership should have shifted some years ago.

The advent of capital market securitization technology and its use in reinsurance could have pushed some pieces of the chain into the hands of other actors and away from brokers. So too could technology.

But so far we aren’t seeing these shifts and brokers are doing an excellent job of retaining pieces of the chain that perhaps can be performed better and more efficiently by others.

In part this is because of the brokers scale and importance in the insurance and reinsurance market.

But it’s also partly down to carriers failing to push forwards their own efficiency as fast as they could, but more importantly their failure to push for a wholesale reimagining of the insurance risk-to-capital market chain, which could have shifted some additional value in their favour.

McKinsey’s report is a good read for anyone interested in the future of insurance and reinsurance and while it discusses the value shift towards brokers and value destruction of the carrier side, we believe this is still in its infancy and the market remains on the cusp of more wholesale change that could shift these dynamics once again.

Ultimately, there is an enormous amount of value still to be created across insurance and reinsurance, not least through a wholesale embracing of new technologies alongside capital market tools, to create entirely new ways for risk and capital to be matched and traded.

Alongside the creation of new product categories, as the world becomes increasingly risk averse and looks to insurance and reinsurance players as the experts that can help to smooth volatility.

While McKinsey’s report perhaps gives a gloomy overview, it is in fact a time for significant optimism. But this is going to require a further rearranging of the guard, as the value is not always being correctly apportioned right now.