Zurich based independent provider of industry-wide European catastrophe insurance data and loss indices, PERILS AG, has released satellite-based flood footprints for the ongoing catastrophic flooding event in Central Europe. The floods which have affected Germany, Austria, the Czech Republic and Hungary are expected to result in billions of Euros of insured losses.

The images released by PERILS, which it says will be updated while the flood event continues, are based on radar and optical satellite data, and cover the Danube and Vltava-Elbe river basins. Daily flood snapshots will be produced by PERILS, which it says will facilitate the analysis and quantification of the possible impact of the events on the insurance and reinsurance industry.

In addition, after the flood event has subsided, PERILS will also produce a map showing the maximum extent of the flooding. The flood footprints images are in a geo-coded format allowing them to be easily combined with other geo-coded data, including insured exposure information.

The images are released as part of the trial phase of a project PERILS launched in 2012 to provide satellite-based flood footprints to the insurance industry and are sponsored by the European Space Agency. The map data is produced by SERTIT and Vista, companies offering Remote Sensing services. PERILS acts as the distribution platform for the data.

You can see an example in the screenshot below: 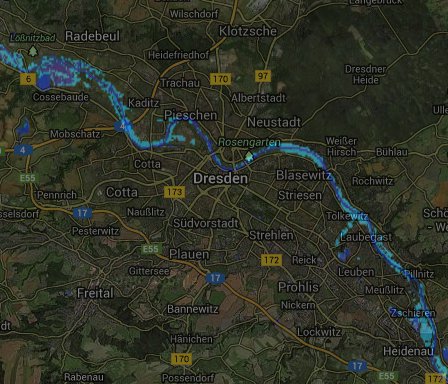 It’s seen as a complementary service to the provision of insurance industry loss data and indices, and likely will help PERILS add European flood data to its services. This could help to stimulate the use of instruments such as industry loss warranties or catastrophe bonds for transferring flood risks to reinsurers and the capital markets. There is also a possibility that flood extent mapping and satellite images could be used as a factor within a parametric trigger themselves in the future.

The satellite-based flood footprints can be viewed and downloaded free of charge from the PERILS website at www.perils.org/web/products/earth-observation.

Eduard Held, Head of Products at PERILS, commented on the release of this images; “We sincerely hope that the flood footprint information provided by PERILS will assist the industry in managing the consequences of the flood events currently impacting Central Europe. Our aim is to provide data which is of high relevance to the industry as a whole and which contributes to the better management and understanding of natural catastrophe risk.”