PERILS AG, provider of industry-wide European catastrophe exposure, industry loss data and indices, has lowered its estimate of insurance or reinsurance market losses from the UK flooding caused by storm Desmond at the beginning of December 2015 to £662m ($940m).

The reduction of almost 8%, from the initial loss estimate for the Desmond related UK floods of £717m ($1 billion) published on 15th January, comes as PERILS gains increasing certainty of the true insurance or reinsurance market impact from the UK flood event.

The losses from storm Desmond are expected to be largely handled by primary insurance companies, with a small amount hitting reinsurance firms. A number of ILS fund managers reported exposure, however losses are expected to be merely attritional at worst for ILS players although some ILS funds have small exposures to the accumulation of severe winter storms, flooding and inclement weather suffered by the UK.

The loss estimate covers a flooding event that followed European windstorm Desmond, which struck the UK on the 4th December, with flooding impacts calculated by PERILS up to the 24th of the month.

Rainfall from the storm fell on ground saturated by a series of European wind events. The flooding peaked in the UK counties of Cumbria and Lancashire on the 5th and 6th of December, with impacts stretching later into the month.

In line with PERILS loss reporting schedule, a third flood loss estimate for Desmond will be available on the 4th June 2016. This second estimate and any subsequent loss estimates will be provided in full resolution, with losses broken down by CRESTA zone and by the property sub-lines Residential and Commercial.

PERILS also previously estimated insurance property market losses of £526m from windstorm Eva – Frank which struck the UK in late December and resulted in a period of flooding running into January. It will be interesting to see if that loss estimate reduces as well when the next report emerges. 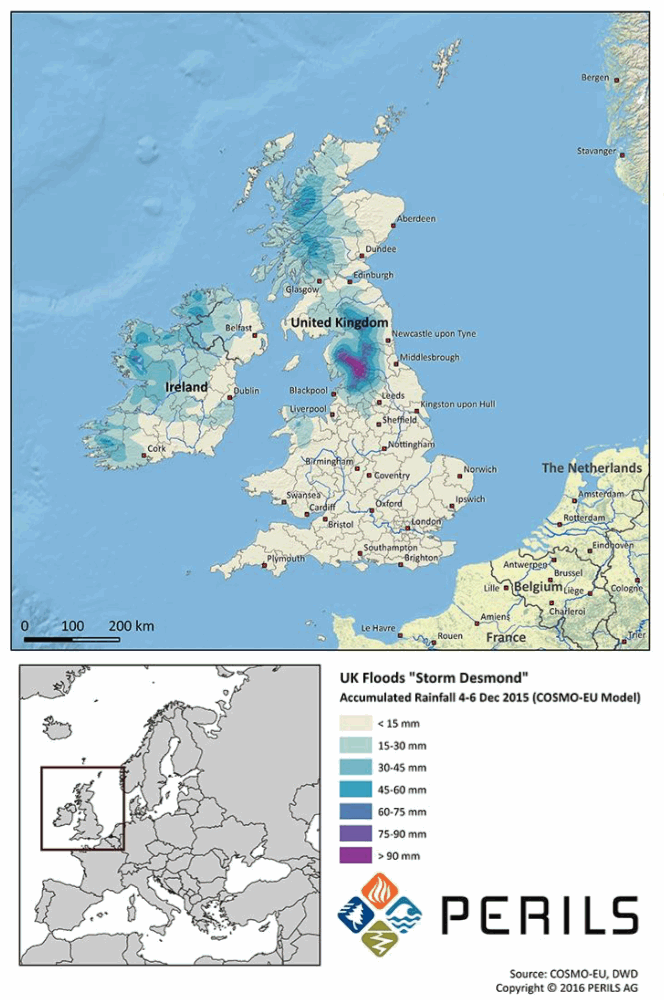