Parts of France and Italy have been hit by a so-called “Mediterranean episode” in the last week, which drove torrential rainfall and flooding from November 21st to 24th and could drive economic losses of more than one billion Euros.

According to Impact Forecasting, the catastrophe risk modelling specialist unit of insurance and reinsurance broker Aon, the storms, rainfall and flooding affected parts of southeastern France and northwestern Italy along the Mediterranean coast the most, resulting in eight fatalities.

A Mediterranean episode is a weather or climate phenomenon that can result in particularly intense storm systems in southern France, eastern Spain or northwestern Italy.

Normally, these episodes occur around 3 to 6 times a year and mostly during the autumn months, when the sea is still warm enough for water to evaporate and cause high levels of moist, warm air.

When a low-pressure system is in place over Western Europe, a mass of moist, warm air can be pulled from the Mediterranean Sea northwards, hitting mountain ranges and resulting in deluges, flooding and damage.

The Mediterranean episode from November 21-24 caused rainfall totals of as much as 395 millimeters (15.6 inches) in Loubaresse, Ardèche Department in the Cevennes region of France. Rainfall totals in other areas of the Var were the highest since a similar episode in 2011. 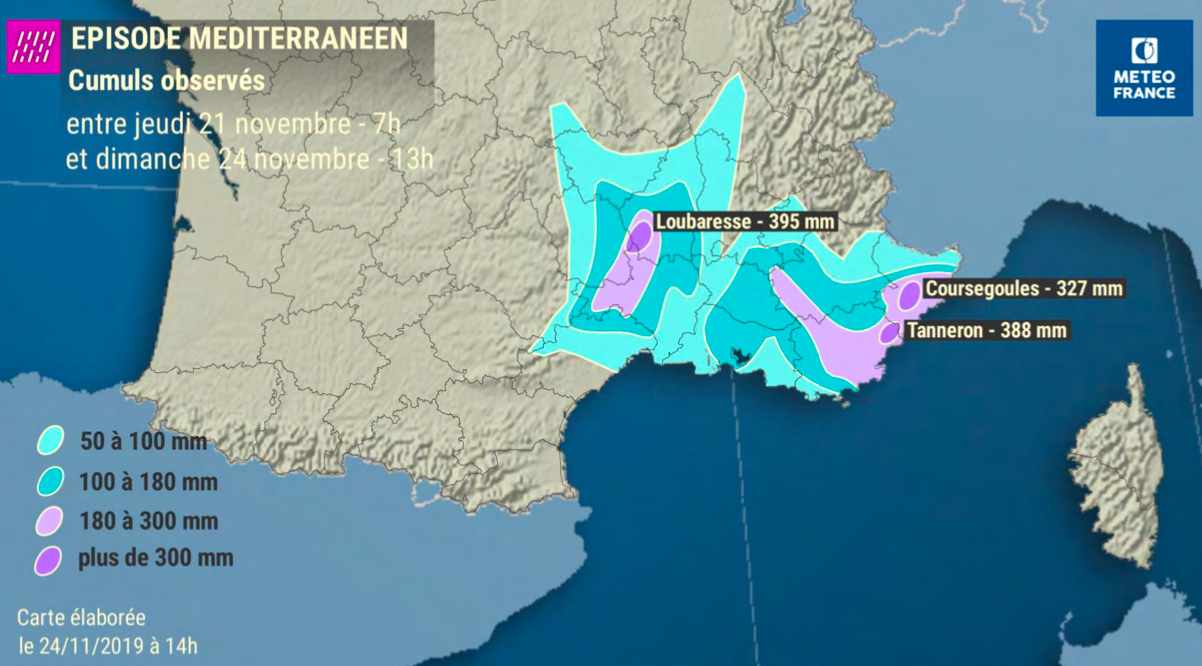 Hundreds of properties were flooded and thousands evacuated, across the affected regions of France and Italy, as rain water rushed downhill and rivers overflowed.

Aon said that the flooding in France and Italy is “likely to result in notable economic and insured losses.”

Aon’s Impact Forecasting has counted up some of the preliminary estimates of immediate costs and come to EUR 940+ million already.

At that level of economic impact the costs falling to the insurance and reinsurance market will be expected in the hundreds of millions of Euro’s, we’d imagine.

This isn’t the first severe weather and flooding outbreak in southern Europe of the year. Flooding in Spain earlier in the year drove hundreds of millions of insurance and reinsurance market losses, while Italy has been hit by numerous severe weather outbreaks this year as well and southern France already been deluged this Autumn.

As we reported recently, the Atmos Re cat bond sponsored by Italian insurer UnipolSai is expected to face a total loss, based on rising ultimate losses from a broad range of European severe weather related and atmospheric perils, including flooding.

These severe weather events in Europe, particularly where extreme rainfall hits mountainous areas, are becoming an increasing concern, as losses to the insurance and reinsurance sector rise.