Despite the fact hurricane Matthew impacted the U.S. coastline, as the first major hurricane to do so in a number of years, the economic loss of around $10 billion is only anticipated to result in around $5 billion of loss to insurance and reinsurance markets. 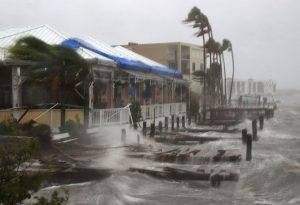 Aon Benfield’s risk analytics and modelling unit Impact Forecasting expects that while total U.S. economic losses from Matthew could reach as high as $10 billion, the public and private insurance loss is estimated to only reach around $5 billion.

One reason for this is that much of the inland flood loss in North Carolina will have been uninsured, due to the low take-up rate of the U.S. government’s National Flood Insurance Program (NFIP).

Once again this demonstrates the insurance and reinsurance protection gap is not simply an emerging market issue, rather it is evident in perhaps the most mature property catastrophe insurance market in the world in the United States.

Matthew also caused economic losses of at least $5 billion outside of the U.S., in the Caribbean, with Cuba (USD2.6 billion), Haiti (USD1.9 billion), and the Bahamas (USD600 million) accounting for most of the loss total.

The total economic loss from hurricane Matthew is anticipated to reach £15 billion, while insurance coverage and ultimately reinsurance capital will pay perhaps less than 50% of the total damage the hurricane caused.

Steve Bowen, Impact Forecasting director and meteorologist, commented; “The extensive footprint of Hurricane Matthew left considerable damage and humanitarian impacts from the Caribbean to Canada. The system also became the costliest hurricane in the United States since Sandy in 2012. Despite causing billions of dollars in damage, it could have been even more catastrophic. Had several slight wobbles not occurred, we are likely having an entirely different conversation when it comes to the financial impact in the state of Florida.”