Hurricane Ian is expected to form within the next few hours, as tropical storm Ian has now begun to intensify and gain additional structure, while at the same time the forecast model consensus has shifted back east towards the Florida Peninsula’s west coast, raising the prospects of larger insurance and reinsurance market losses.

Over the weekend, the forecast model consensus was dragged west, mainly by the GFS model, with a landfall for hurricane Ian being forecast for the Florida Panhandle.

This was seen as a scenario likely to result in a lower loss for insurance, reinsurance and insurance-linked securities (ILS) market interests, as the less highly-populated area contains lower insured values, but also as the more hurricane Ian stayed west the more it was expected to weaken before making landfall, due to interaction with dry air and an expected pick up in wind shear.

Now, though, the GFS model has shifted back towards the Florida Peninsula and so is coming more into agreement with other forecast models, with the consensus being a rapidly intensifying hurricane Ian to move into the Gulf of Mexico and reach major Category 3 or 4 strength, before heading towards the west coast of Florida.

The current forecast cone shows hurricane Ian coming ashore as a strong Category 1 or 2 hurricane on the northern west coast of the Florida Peninsula, but perhaps more concerning is the fact it also shows a major Cat 3+ hurricane Ian sitting offshore of Tampa, where it could push significant surge onshore and damage a large area of coastline with hurricane force winds as it moves towards its final landfall.

It’s also worth considering that a shift back further east could bring back the scenario from Friday, when the NHC’s forecast cone showed a major Category 3 hurricane going directly ashore of the Florida west coast, again a scenario with a higher insurance and reinsurance market loss attached to it.

Here’s the latest forecast cone from the NHC for hurricane Ian:

While there has been a definite shift back east, bringing Tampa back closer to a major Category 4 hurricane, there is still significant uncertainty in the final solution, as to whether hurricane Ian can come ashore closer to that region of Florida, or further north.

All of which means there is a huge amount of uncertainty in the potential for hurricane Ian to cause major losses for the insurance, reinsurance, ILS and catastrophe bond community.

As we explained the other day, estimates vary wildly depending on the model track used and the landfall location, and this continues to be the case at this time.

Even a Florida Panhandle landfall scenario shows a range from the hundreds of millions to billions, remember 2018’s hurricane Michael came relatively close to $10 billion.

But, as the landfall location comes down the west coast of Florida’s Peninsula and also depending on how close hurricane Ian tracks to the coast as it heads north, the modelled industry loss estimates rise significantly.

Andrew Siffert, Senior Meteorologist at broker BMS Group, explained that a scenario that sees hurricane Ian rapidly intensify and move towards a landfall further east, so the solution around the Tampa Bay area, could result in a $15 billion to $25 billion industry loss.

This scenario would, without a doubt, be the most impactful to the insurance industry and be similar, if not worse, than the Tarpan spring 1921 hurricane. That hurricane today would cost the insurance industry between $15 and $25B in the loss. This scenario would also mean the overall impacts would occur sooner on Wednesday into Thursday morning. In this scenario, Ian will also be closest to the warm Gulf of Mexico loop current. It would travel over some of the warmest waters in the Atlantic Ocean and still be in a moist, low-wind shear environment, thereby allowing Ian to be stronger. The ECMWF model at this time has a peak intensity at landfall of 112kts (128 mph), with a central pressure of 957 MB. This would be a solid Category 3 or 4 hurricane at landfall.

Conversely, should hurricane Ian head further north towards the Panhandle of Florida, the industry loss could be significantly lower, with wind shear and dry air weakening hurricane Ian before landfall, on which Siffert said:

This is undoubtedly the best scenario for the insurance industry, resulting in much lower loss over a less populated part of the Florida coastline. As mentioned in past updates, Hurricane Hermine impacted this area in 2016 and only caused $230M in insured loss.

Even if hurricane Ian failed to weaken as the GFS model suggests it would, if it heads for the Panhandle, it would still not be as strong as hurricane Michael in 2018, it seems, suggesting a lower loss would be the outcome of that scenario, although perhaps something in the billions.

Over the weekend, as the forecasts shifted west and further away from Florida, the industry loss scenarios dropped dramatically for the Panhandle landfall, compared to the more Tampa-focused solution from Friday.

Now, we’re almost back at Friday’s solution again, albeit slightly more offshore still, so the industry loss scenarios in the tens of billions are now resurrected again.

This is why live cat trading is so fraught with difficulty and while there has been some quoting available, it seems unlikely anyone would have bought last minute reinsurance or retrocessional protection last week, given the shifting in the model runs was becoming evident.

Which means today could be the day for any live cat buyers, particularly if you really need to cover off a potential major hurricane landfall around Tampa area. As ever though, capacity will be very costly so matching a buyer and a seller won’t be easy for brokers, meaning this may be another hurricane where there is little to no protection bought while the storm is in the water and approaching.

With uncertainty still high though, over the eventual track of hurricane Ian, the landfall location, how much influence dry air and wind shear could have, it’s a particularly difficult storm to predict an industry loss quantum for.

Finally, here’s Tomer Burg’s forecast map, which shows MPH next to the plots and so is perhaps even more useful than the NHC cone: 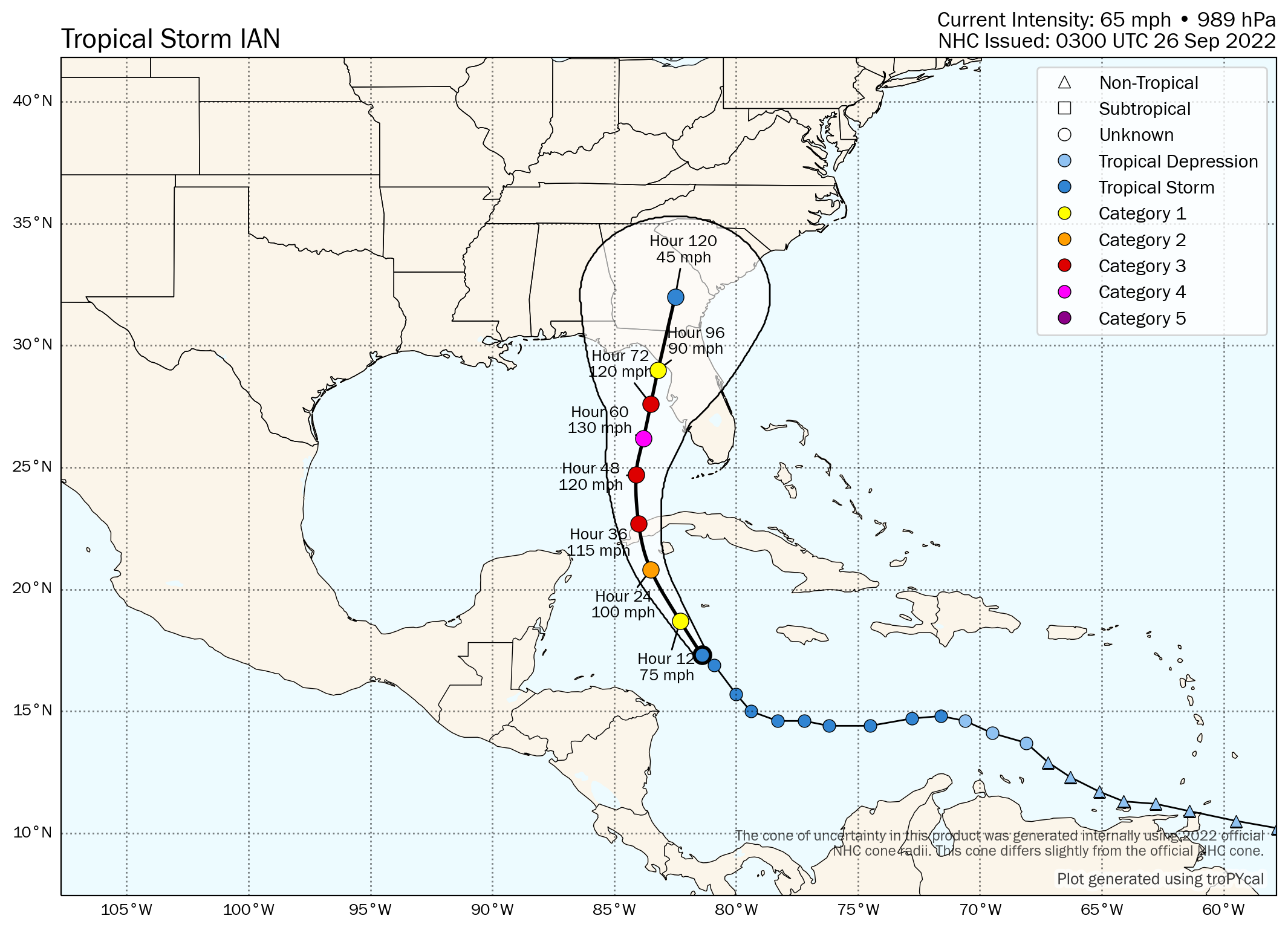 « Older article Risk to remain attractive, we’ll need all the capital we can get: Aon panel