Insurance industry loss estimates from recent hurricane Barry are not expected to exceed $500 million, both to private and public markets, with the NFIP set to take roughly half the total and a likelihood that primary insurers will bear the brunt, with little falling to reinsurance carriers. 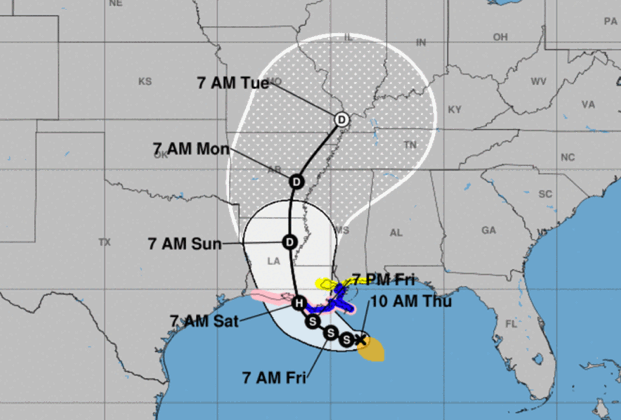 Catastrophe risk modelling experts at RMS are the second to issue an estimate for the insurance and reinsurance industry wide impact from hurricane Barry and its estimate is aligned with the first to be published by Karen Clark & Company of an up to $300 million private re/insurance market loss.

Hurricane Barry, the second named storm of the 2019 Atlantic season, made landfall as a weak hurricane last weekend, coming ashore on the Gulf Coast in Louisiana. The hurricanes main impacts were seen to be water related, from torrential rainfall, storm surge and related flooding incidents, although storm total rainfall forecasts proved to be higher than actually experienced.

RMS believes that insured losses due to wind, storm surge, and inland flood damage, including losses to the National Flood Insurance Program (NFIP) from hurricane Barry will not rise above $500 million.

Of this, the National Flood Insurance Program (NFIP) is expected to bear the burden of roughly half the bill, falling well below where reinsurance protection kicks in for the Program.

RMS noted that Louisiana has the third highest number of NFIP policies-in-force in the U.S., with many in-force in the region impacted by storm surge or inland flooding from hurricane Barry.

“Wind and storm surge-driven losses for Barry are expected to be in line with losses projected prior to landfall. The storm made landfall in Louisiana as a weak Category 1 hurricane, then quickly weakened due to its vulnerable structure. Sustained hurricane-force winds were only experienced along a small portion of the southern Louisiana coastline,” explained Jeff Waters, senior product manager of the RMS North Atlantic Hurricane Models.

Holly Widen, product manager, Global Climate, RMS, added, “Although, at first, Barry did not seem to generate the forecasted severe rainfall, it ended up producing more than 23 inches in southwest Louisiana and 13 to 14 inches in portions of Mississippi and Arkansas; the latter of which is now the fifth state to set a new tropical storm rainfall record in the past two years. The heavy rainfall resulted in flooding across portions of the lower Mississippi Valley, albeit in less populated areas. Thus, flood-driven losses are now expected to be lower than initially anticipated.”

So hurricane Barry is going to be a largely primary insurance market loss, with reinsurance impacts minimal.

With loss estimates closing on a $250 million to $300 million private insurance industry loss, Barry’s impacts are not going to be sufficiently costly to trouble any insurers in the region affected.

← Older article Richard Lowther to move on from Hiscox ILS