Reported insured losses and reserve setting related to the COVID-19 coronavirus pandemic have now reached $20.5 billion, according to data collected by advisory PeriStrat LLC and augmented by our own research.

Zurich-based PeriStrat LLC, operated by Hans-Joachim Guenther, has been aggregating publicly available loss reports from insurance and reinsurance companies to give a picture of how the Covid-19 industry loss impact is developing.

We’ve now augmented that data with a few additions from our own research and listed it over on our sister site Reinsurance News, where you can analyse the data more closely.

The answer so far is slowly, compared to the industry loss estimates that tend to range anywhere from US $30 billion to over $100 billion, although consensus would suggest something around the US $50 billion to $70 billion range for the global property and casualty (P&C) insurance and reinsurance industry.

So far, Guenther’s PeriStrat data, added to our own analysis, tracks almost $20.5 billion of reported Covid-19 losses from across the insurance and reinsurance industry, with these reported numbers representing actual losses as well as IBNR reserves reported by re/insurers.

Update: The total stands at $21.5bn as of Sunday August 2nd.

The estimate reported for the Lloyd’s of London market is top of the list currently, pegged at $3.65 billion by Guenther.

Following that is an estimate for insurer FM Global, who hasn’t actually reported anything itself as yet, but PeriStrat noted that communicable disease coverage FM Global offered in its standard policies aggregates to approximately $3bn in sub-limits.

After that are major players Swiss Re, AXA, Munich Re, Chubb, Zurich, Allianz and SCOR, all of which have reported more than half a billion dollars of expected Covid-19 impacts apiece.

There will be some overlap in these figures, as insurance and reinsurance carriers may both be reporting the same losses to a degree, PeriStrat notes.

In addition, some of the company reported Covid-19 losses may also overlap with the Lloyd’s market estimate as well and others may be after reinsurance recoveries, while some are reported before.

With second-quarter and first-half 2020 reporting season now underway, we should see the total rise further over the coming weeks, as right now $20.5 billion seems very low and losses will rise as the impacts become clearer over the coming months.

So far, loss reports are trending upwards at their second updates, with some companies reporting significant increases ranging from a doubling of their Q1 totals, to as much as five or six times. 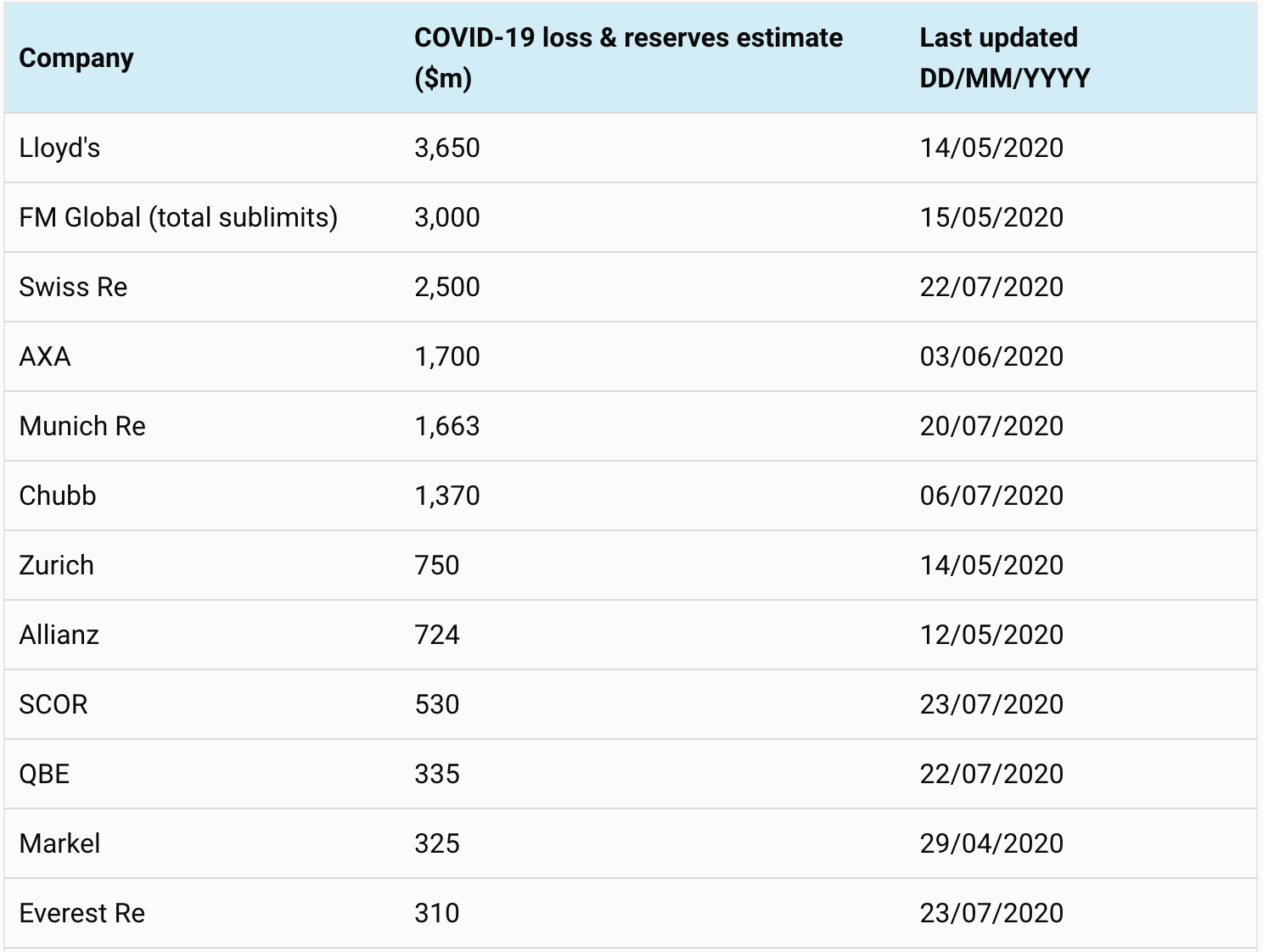