The catastrophe bond market remained relatively stable under the threat from hurricane Florence, with one of the main indices used to track the value of outstanding cat bonds only registering a 1.15% decline at the end of the week.

The Swiss Re Cat Bond Index only ended the week down at 88.52, falling from around 89.55 at its previous pricing.

As seen in this image that was published by Bloomberg journalist Hilary Clark, the decline in the Index was significantly smaller than those seen for other hurricanes and major catastrophe events, suggesting that by the time of pricing on Friday the threat was seen as much reduced thanks to hurricane Florence’s winds dropping. 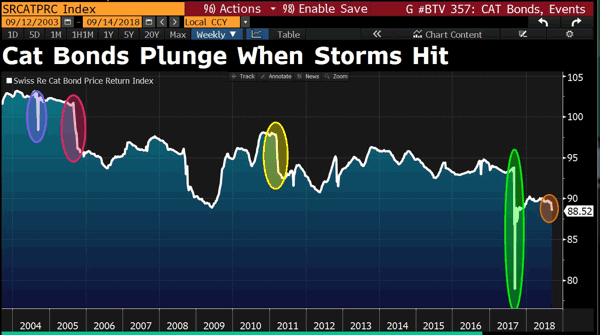 The expectation of major reinsurance market losses declined with the winds, as Florence went from an expectation of a Category 4 hurricane landfall down to an actual Category 1 landfall.

With this the threat switched from wind to water and as a result the most marked down catastrophe bond in the secondary market appears to now be the FEMA sponsored NFIP flood reinsurance program transaction, the $500 million FloodSmart Re Ltd. (Series 2018-1) deal.

This flood cat bond remains at risk, but it may be the only one now.

Other aggregate cat bond structures may find their retention and deductibles further eroded by the impacts from hurricane Florence.

As a result, there has been some marking down of a few aggregate cat bonds in the latest Friday broker secondary market pricing sheets that we have seen.

ILS fund manager Plenum Investments said that it expects no losses to its portfolio, but it does not hold the FloodSmart Re cat bond, which it also feels is likely the most at risk.

However, Plenum noted that unless the flood damage in the Carolina’s and Virginia approaches those from hurricanes Harvey and Sandy it is unlikely the losses will reach far enough up the NFIP’s reinsurance program layers to hit the cat bond.

But the flooding in the Carolina’s has been particularly severe, so it will be some time until we know whether there has been any impact to that cat bond.

The reaction of the catastrophe bond market to hurricane Florence was orderly and mature, as evidenced by the only slight dip in secondary pricing shown in the Index.

The dips highlighted in the chart from Bloomberg above show the reaction to particular industry events, with last years hurricane Irma causing the most significant decline when it was thought the storm could travel up the Florida east coast.

But with Florence the market adapted its expectations of loss with the changing forecasts and one Florence’s wind speeds had dropped cat bond traders were quick to realise that the potential of a market-wide impact had disappeared and any impact to cat bonds would be limited.